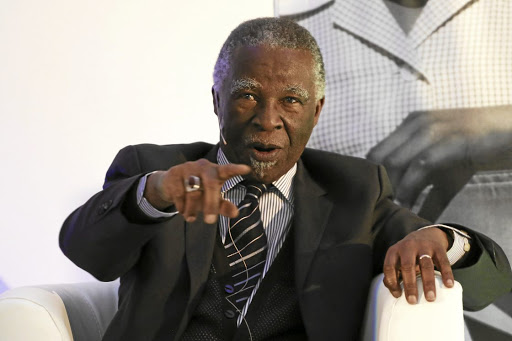 Former president Thabo Mbeki took issue with how SA was marketed as a tourism destination. He said there was more to the country than wildlife and beaches.
Image: Masi Losi

Former president Thabo Mbeki hopes the presidential library bearing his name will be at the centre of preserving SA's and Africa's history and heritage.

The Thabo Mbeki Presidential Library will be a place where people can engage one another and maybe draw inspiration from leaders like Julius Nyerere, Kenneth Kaunda and Kwame Nkrumah, among others, the former statesman said.

“We will be able to say, 'Come to Johannesburg, come to this tourism place here, to see how the South Africans, the Africans, are engaging one another in the context of their past, saying 'but what do we do about ourselves?'.

“I'm sure that all of us here, certainly the South Africans present here today, would be, I hope, very conscious of this. That indeed one of the main challenges we face is talking to one another, saying, 'What do we do about ourselves, about this country which has too many problems, very many bad things, strange things?'

“Let the rest of the world come and maybe learn a lesson that this is what the Africans do,” Mbeki said.

ANC deputy secretary-general Jessie Duarte said the party chose Tshwane to launch the manifesto because "we really need to win this city back".
Politics
4 weeks ago

The city of Johannesburg announced that it will host the library, which council speaker Nonceba Molwele said would contribute to the diversification of the city’s tourism and heritage offerings. Molwele said the library will become a must-see landmark feature on the continent and a unique selling point for Joburg.

“Commonly this milestone is seen as an opportunity to realise the ambition of the dreams of President Mbeki to advance and empower an African Renaissance,” she said.

The Thabo Mbeki Foundation and the city have signed a three-year agreement to develop the site in Killarney that has been earmarked for the library.

Explaining the design of the buildings, which are red dome-like structures, Mbeki said these were true to the historical technology used by Africans centuries ago. Mbeki said their architect, David Adjaye, who is a Tanzanian-Ghanaian-British citizen, insisted on using the traditional technology that forefathers used, a mud brick made of red soil that will be processed to be harder than cement brick.

“He said, 'I'm insisting, let's do as much as possible not to lose our past, our history.' This thing that made us Africans and this technology is important,” revealed Mbeki.

Adjaye had also insisted that no trees would be destroyed in the building of the eight structures which will be built on four plots.

During a week of unprecedented violence and chaos since the advent of democracy, South Africans tasted the “bitter fruits of a counterrevolutionary ...
News
3 months ago

In his speech, Mbeki took issue with how SA was marketed as a tourism destination. He said there was more to the country than its wildlife and the beaches.

He insisted that SA should invite people to see more of the country including the golden rhino at Mapungubwe, Barberton and the Karoo.

“This country as you know is marketed everywhere in the world for the sun, the beaches, the elephants, leopards, hyenas and all that; the wildlife but I keep saying that we are more than that.

“Why don't we tell these visitors, 'come to SA, we will take you to Mapungubwe because here you have this extraordinary place where you find the golden rhino. What it tells, is that these South Africans many centuries ago mined gold and were able to fashion it and that's why you've got the golden rhino,” he said.

“This high technology, those years and you could see at Mapungubwe that they were trading with China. Why don't you tell the whole world that come, I'm sure you've seen the elephants and the lions and you've gone to lie on the beach but there is this other SA.”

Mbeki said SA competes with Tanzania, Kenya and Chad about the definition “Cradle of Humanity” and that foreign visitors should be invited to see the origins of human beings.

“But you don't tell that kind of story ... come and see the lions and lie on the beach,” he said drawing laughter from his audience.