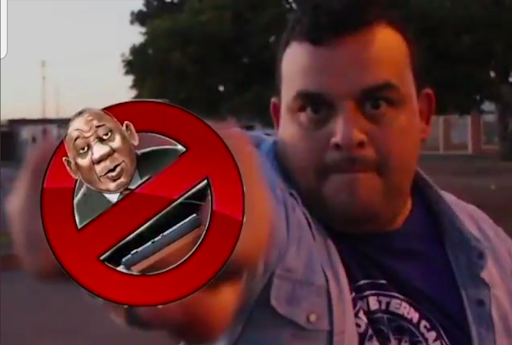 The video, dubbed “cringeworthy” by many, was released this week on Facebook.

In it, McKenzie can be seen asking residents to vote for him again if they want problems such as crime, water and sanitation fixed. He has been a ward councillor in Bonteheuwel since 2016.

The video starts with a supposed gangster lurking in the corner with a gun. A few seconds later, it shows community members expressing their frustration at the lack of water, criminals running around in the area and blocked drains.

Someone can then be seen calling for help and McKenzie emerges as the hero to save the day.

In another scene, McKenzie can be seen pulling a yellow T-shirt out of a blocked drain before walking up to the gangster and punching him in the face.

The video is accompanied by a remix of the Ghostbusters theme song.

Explaining the video, McKenzie said he hoped the video will encourage Bonteheuwel residents to vote for DA and “keep Bonteheuwel blue”.

“Vote for Angus McKenzie, vote for the DA to continue making Cape Town a better place and to save this country. There is no other party big enough to take on the collapse of the ANC,” he said.

On social media, many users, including political puppet Chester Missing, weigh in on the video.

Missing said the video was confusing but also hilarious.

My reaction to that crazy as hell DA elections video. pic.twitter.com/DpsE8SG2As

Anyone else see that constipation worthy Angus Mckenzie video before having breakfast?

This is a great take on the fantastically delusional Angus McKenzie Bonteheuwel ward councillor ad....😂😂😂🇿🇦🇿🇦🇿🇦 https://t.co/rJRgUms4ON

So Angus Mckenzie punched Cyril Ramaphosa. And a gangster. Superman style. But he can’t switch on the water in his own area? Or clear the drains. He’s been there 5 years. He’s acting ambitions seems greater than his community leadership ambitions. pic.twitter.com/3IcghD5XZW

Maybe Angus Mckenzie can fix the Whatsapp issue for us.

Angus McKenzie releases a video about how he is going to tackle the lack of water, problems with crime etc... Cape Town is run by the DA, so he is basically saying that under his and their watch, they trying to fix what they are struggling to fix 🤣 pic.twitter.com/EHinNh4QwZ

A short summary of Angus McKenzie in his campaign ad.

1. Don't wipe your bum after sitting in the toilet. Just pull up your pants and leave.

2. Fight armed thugs with a fist.

3. Deliberately turn off your tap and call Angus.