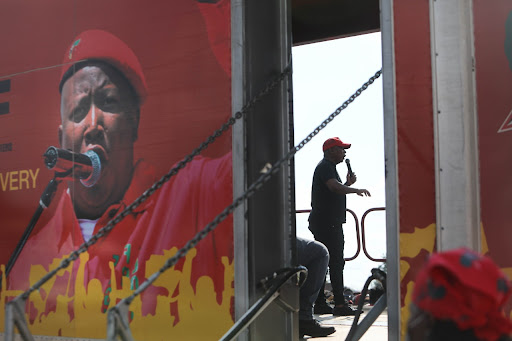 EFF leader Julius Malema, addressing the community of Letlhabile in the North West, said a DNA bank would help nab rapists speedily and serve as a deterrent against the crime.
Image: Alaister Russell/Sunday Times

EFF leader Julius Malema has called for the establishment of a “DNA bank” in SA to curb crimes such as rape.

Malema was on the local government election campaign trail at Letlhabile in Brits, in the Madibeng municipality in the North West, on Friday afternoon.

Malema said it defies logic that a “rape capital” of the world like SA does not have a DNA bank to help catch rapists speedily.

This was however not surprising, he added, because the government of the day, headed by the ANC, was only concerned about who gets what tender and nothing else.

“Kids are being raped every day and some of these rapists are roaming around the same communities, not in prison, and are being hailed as community heroes. Why? Because there is no DNA bank in SA, which would make it easy to catch these criminals and send them to jail for a very long time,” said Malema.

“Many rape survivors in our communities cannot find closure for years because we cannot trace these criminals through a simple thing called DNA.

A security guard accused of raping a male Mjanyana Hospital employee is to appear in the Ngcobo magistrate’s court on Friday. The alleged rape ...
News
2 weeks ago

“Crime must end with our generation, those that come after us must find systems in place. But no, that will not be done, because what SA is good at under the ANC is tenders because that is where there is money.”

Malema came down hard on the tender system and outsourcing of services by municipalities, saying it was a javelin-throwing scheme for business people and corrupt municipal officials and the main cause of poor service delivery.

Because of tenders, claimed Malema, many businesses that were appointed for services were the same ones who sabotaged the work they did to get another tender to fix it. This, he said, at local government level was particularly instigated by service providers that operate in the water and electricity space.

The modus operandi was the same, with those businesses that assist with water trucks in the event of water cuts to fix running water pipelines.

With respect to water, he charged, it was looting open season because even ANC councillors were owners of waters trucks who deliberately cut running water pipelines to force municipalities to go out to tender for water trucks and appoint their companies.

“Why do municipalities not own water trucks that will be on standby to supply water in case of emergencies? The intentional sabotage would end because even if you do it, there will be no tender issued. Municipal water trucks will move in and no one takes advantage of the situation.”