‘I have no such power’: Ace Magashule on Oscar Mabuyane assertion 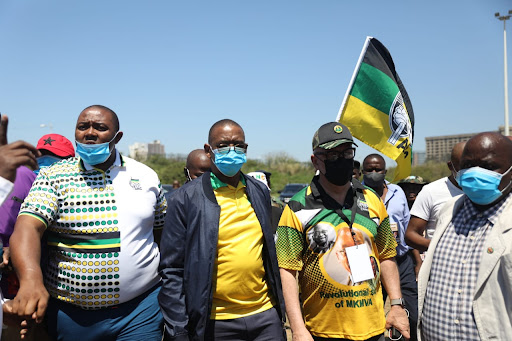 Suspended ANC secretary-general Ace Magashule and Carl Niehaus arrive at the People's Park in Moses Mabhida Stadium for the prayer service for former president Jacob Zuma who was released from jail after serving two months for contempt of court.
Image: SANDILE NDLOVU

Suspended ANC secretary-general Ace Magashule has dismissed allegations that he was behind a “fishing expedition” by the Hawks against Eastern Cape premier Oscar Mabuyane.

According to Mabuyane, he was subjected to questioning by a Hawks official from the Free State in August which suggested to him that there may have been a political vendetta driven by Magashule, whom he was vocal about being suspended after he was criminally charged.

Asked about allegations made by Mabuyane, Magashule simply said: “I have no such power.”

The allegations relate to an affidavit by businessman Lonwabo Bam in 2019 in which he alleged Mabuyane had personally and unduly benefited from public money from the Winnie Madikizela-Mandela memorial.

Eastern Cape premier Oscar Mabuyane suspects that suspended ANC secretary-general Ace Magashule may be behind a "fishing expedition" by the Hawks ...
Politics
3 days ago

A criminal case has since been opened for investigation against Mabuyane.

Magashule, who was asked by the party to step aside due to a criminal charge against him, did not want to comment about what the ANC should do with regards to Mabuyane.

“Let me not enter that space, that’s not for me to decide,” he said.

Mabuyane in court papers said he felt like he was an accused — even though there were no specific allegations against him and, thus, he has no case to answer to.

But what stood out for him, he said, was the fact that the investigation was conducted from the Free State, Magashule’s home province, despite the alleged crimes having taken place in the Eastern Cape.