'I’m sure things will be right over time,' says David Mabuza as he woos Mpumalanga voters 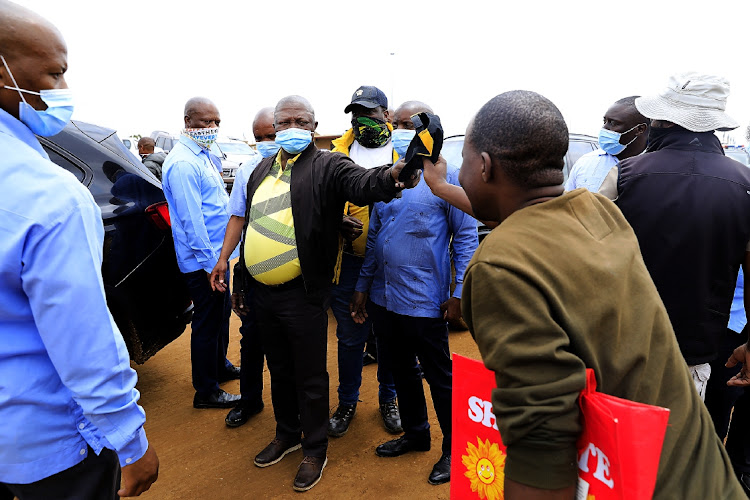 Deputy President David Mabuza bemoaned factions in the ANC, saying during campaigning on Thursday that it was only through the renewal of the organisation that these divides would be repaired.
Image: ALON SKUY

Deputy president David Mabuza says campaigning has been difficult this year, with concerns over unemployment and poverty having grown in the wake of the Covid-19 pandemic.

Mabuza, who was speaking while on the campaign trail in KaNyamazane, outside Mbombela, in Mpumalanga on Thursday, also bemoaned factions in the ANC — saying it was only through the renewal of the organisation that these divides would be repaired.

“This campaign is difficult because the Covid-19 situation has created a serious challenge. A lot of people have lost their livelihoods, a lot of companies have closed down, poverty has deepened, unemployment has grown. This is a situation that we understand and [we're] working on it.

“I’m sure that once we get our people vaccinated to get our economy working ... people will go back to work and SMMEs will be back on their feet. I’m sure things will be right over time,” said Mabuza.

ANC T-shirts a hit as David Mabuza campaigns in Olivenhoutbosch

An ANC T-shirt and the party’s doek were the most sought-after items when the governing party’s deputy president David Mabuza campaigned in Tshwane ...
Politics
1 month ago

He added that the ANC in Mpumalanga would have to hold an elective conference to replace him after the elections if the country was not hit by a Covid-19 fourth wave.

“The situation is the same countrywide. Because of the lockdown situation there have not been elective conferences. I’m sure that beyond these elections, if we are not hit by a fourth wave, the province will have to hold a conference to elect a chairperson.

“The ANC is in the process to renew itself. We are trying to deepen unity and I said when we were in Mamelodi that unity is a continuous process ... We are mindful of the divisions that are there and we are going to attend to them. They have created a serious problem in the candidate selection process and we are going to attend to that post the elections,” said Mabuza.

He said the issues raised by communities in KaNyamazane, including damage to houses in storms, would be referred to the relevant authorities.

Resident Thembi Mashego complained to Mabuza that her roof was damaged in a recent storm, allowing water to leak in. She said the government had promised to help people repair their homes, but the process was slow.

“We want your government to work for us because it seems like we are being lied to,” said Mashego.

Mabuza went to houses listening to people’s concerns and handing out ANC regalia including kangas and T-shirts. Using an ANC bakkie with a loud hailer, Mabuza called for the community to vote for the party in the municipal elections on November 1.