Ramaphosa is full of promises, but is confronted by protesters during his Western Cape campaign 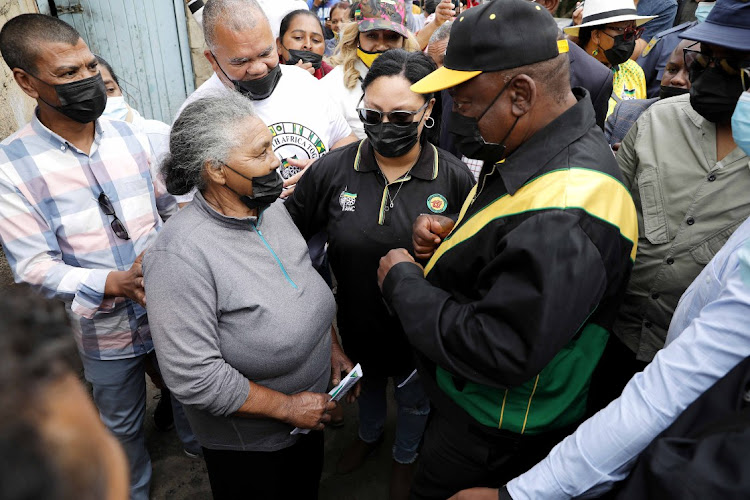 President Cyril Ramaphosa arrives at Mamre near Atlantis for the start of the ANC's election campaign in the Western Cape. Ramaphosa promised Katriena Sambaba that he would build her a new house in the next two to three weeks.
Image: Esa Alexander

With just 10 days to go before the November 1 municipal elections, ANC president Cyril Ramaphosa moved his election campaign into high gear, promising to deliver in two weeks what his party has failed to do over years.

During his campaign in the predominantly coloured township of Mamre, along the R27 on the Western Cape west coast, Ramaphosa was full of promises to the destitute: pledging jobs, running water and free houses within a matter of weeks.

Going door-to-door, canvassing voters in a Mamre ward now under the control of the DA, Ramaphosa made the stunning announcement that he and his ANC comrades would build a brand new house for 70-year-old Katriena “Aunt Thuli” Sambaba in next to no time.

This was after Ramaphosa and other ANC leaders, including minister in the presidency Mondli Gungubele, stopped over at Sambaba's one-bedroomed house where she has been living for 40 years, with her grandchild. There's no running water or proper sanitation in the home where she and her grandchild rely on coal or firewood for cooking in the outside kitchen made of corrugated iron.

As he did his best to lobby support for the ANC, Ramaphosa promised to change Sambaba's plight within the next two weeks by building her a brand new three-bedroomed house.

Speaking in mixture of English and Afrikaans during his charm offensive, Ramaphosa said: “We are going to bring about some changes. I just went into Auntie Thuli's house. It's not a good sight,” he said, amid loud cheers.

this the ANC does out of concern because we are not happy to see how's seen living.

“She's being living there for 40 years. Now with the help of Fiona [the ANC ward candidate] and other comrades, we are going to build her a brand new house,” said Ramaphosa as ANC supporters whistled loudly and clapped.

“I went inside her house and it did not make me happy. But I'm glad that Fiona and other comrades have made sure that she should get a decent house. A brand new house with a tiled roof, nice windows, nice bedrooms and we say thank you very much to the ANC for the work that it's doing for her.”

Ramaphosa said he had been told by the people of Mamre that they were tired of the DA because it was neglecting their needs.

“Aunt Thuli” said she had no choice but to believe that Ramaphosa would deliver on his promise to her.

From Mamre, the next stop for Ramaphosa in the DA-led Cape Town was nearby Witsand in Atlantis.

Here, the script was the same, with the ANC leader promising more of the same but urging ANC voters to come in large numbers on voting day, arguing that this was the only way to keep the DA away from their area.

Members of lobby group Equal Education on Thursday infiltrated an ANC election rally in Khayelitsha at the Cape Flats, where party president Cyril ...
Politics
1 month ago

Ramaphosa then proceeded to the township of Emfuleni, nestled between the N2 and the R300, before making yet another stop in the informal settlement of Greenpoint in Khayelitsha during his whirlwind tour.

But it was at this ANC stronghold area that Ramaphosa was confronted by a group of protesters from civil rights lobby group Equal Rights, who infiltrated the ANC rally and managed to brandish placards expressing anti-ANC sentiments in front of the man in charge of the national government.

Before addressing a crowd of ANC supporters, Ramaphosa demanded that the equal education posters be put down.

“Put down those placards, all of them including those brown ones. I have read them. Or are these people even sober, they look drunk,” said Ramaphosa in Xhosa.

The president's last stop was in the predominantly coloured and Muslim township of Rylands next to Athlone, an area the ANC last controlled in 2011 when they were ousted by the DA.

Ramaphosa's message here was slightly different as he shied away from promises about job creation, speaking largely about his ongoing efforts to renew the ANC and return some semblance of respectability to the organisation.

He said while some pundits were sceptical about the electoral prospects of the ANC in this year's elections, he was confident his party would send shock waves to many when the results were announced.