Bet on ‘DA horse rather than an ANC donkey’, party says at election event 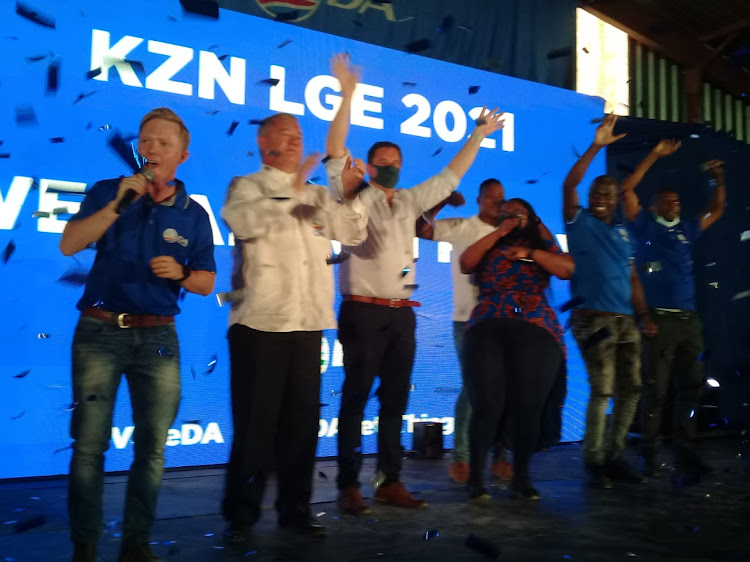 Members of the DA on the campaign trail in Howick, outside Pietermaritzburg.
Image: Mfundo Mkhize

In a final push before the local government elections on November 1, DA federal leader John Steenhuisen has urged supporters to vote for the party so they can oust the ANC in the uMngeni municipality.

He was addressing supporters at the Karkloof Farmers' Market in KwaZulu-Natal on Friday.

“The DA can win two seats to get the majority. The ANC has given up in uMngeni. The DA gets things done,” he said.

Steenhuisen’s visit comes less than a month after he led a team which uncovered alleged corruption in the procurement of the guard house at the Curry’s Post cemetery which cost R2.7m. This prompted the party to call for an audit on the money spent on all infrastructure projects should they ascend to power.

Steenhuisen said the municipality had failed its residents despite high rates charges.

“It takes two seconds to put a cross on a ballot paper — and five years to live with consequences,” he said.

DA leader John Steenhuisen says his party has identified the JB Marks municipality in the North West as a strategic target in the upcoming local ...
Politics
1 month ago

Steenhuisen said residents in the elite Hilton suburb had tried to get the municipality to remove them from Msunduzi’s dysfunctional electricity grid as they are forced to endure rolling blackouts.

He said residents also had to contend with difficulties to hold municipal officials accountable.

He bemoaned the states of the town’s Howick Falls precinct, which was once a main tourist drawcard.

“It is full of litter and drunkenness. Howick should be a star performer, given drawcards such as the falls and Midmar and Karkloof canopy tours. We have to stop this downward spiral.

“The ANC cannot be bothered. It is a case of party first,” said Steenhuisen.

The DA has over the years experienced a steady growth in the Midlands town.

In the 2016 elections it gained a single proportional seat in uMngeni, where the ANC holds an outright majority.

It has also made inroads by opening branches in Mpophomeni township, widely considered an ANC stronghold.

Provincial leader Francois Rodgers urged party supporters to bet on the “DA horse rather than an ANC donkey”.

He said the campaign trial had uncovered the widespread corruption plaguing the province.

“A donkey just concerns itself,” he said.