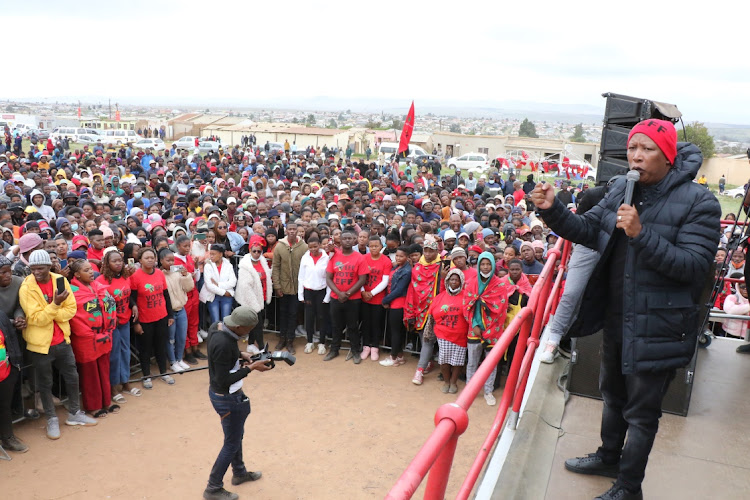 Before the 2014 local government elections he called on AbaThembu to vote for the DA, but King Buyelekhaya Dalindyebo has changed his tune and on Sunday urged his nation to vote EFF on November 1 so they can “teach the ANC a lesson”.

Dalindyebo, who emphasised he was not a member of the party, was speaking at his private residence in Nkululelweni, Mthatha, after a brief meeting with EFF commander Julius Malema.

Malema, accompanied by party MP Mbuyiseni Ndlozi and provincial chair Yazini Tetyana, gave Dalindyebo cattle and revealed they would donate a car to him next week.

Dalindyebo said he had not been a political party member since “I dumped the ANC and the DA chose to dismiss me”.

"I vaccinated because I saw the Jews, the Jewish people vaccinated. The Jews don't play with their lives," EFF leader Julius Malema said..
Politics
7 months ago

Dalindyebo last met Malema when the king was still in prison.

“He has also tendered a decent vehicle for the royal family, which we are very grateful for.

“He is not yet in [government] leadership, but he is doing what the ruling government should be doing and we say to him, may his party continue to grow.

“He has our full support. We urge all the Thembus to vote for the EFF to teach the ANC a lesson, and show them what they should be doing that they are not doing.

[WATCH 🎥]: CIC @Julius_S_Malema wraps up his first community meeting in the Eastern Cape.

“In two weeks’ time the CIC will deliver an ML [Mercedes-Benz ML SUV], a car fit for a king, unlike those who do not respect kings and give us X3s and X4s [BMWs] that get stuck in the mud on rainy days.”

The king said traditionally he was not supposed to vote but “if I have to, I will vote for EFF”.

“I will always support the toiling masses outside the governance,” he said.

EFF will not only take over the wine farms in Stellenbosch, it will drink the wine, says Malema

EFF leader Julius Malema has promised to get a new home for a blind Kayamandi woman who told the firebrand leader of her daily struggles living in a ...
Politics
7 months ago

Malema, who is on a two-day visit to the province, said the people of OR Tambo needed to vote for the EFF if they wanted change.

“This district used to be one of the most exemplary towns in rural areas. It is now like an abandoned factory because the current government cares less about rural areas and rural towns.

[VIDEO 🎥]: MOOD when you know that you are voting for the EFF. #LandAndJobsManje #VoteEFF pic.twitter.com/YA3Jd6GJKt

“We want to take Mthatha back to its former glory, where the children of this area will work and there will be proper roads and houses, reliable electricity and water.”

Malema said they chose to give the king the car, because he worked in rural areas.

“We will come here to hand it over after the elections, and have a ceremony with the leaders of the EFF and royal family, to welcome him back from prison. He could have died there.”

A case of assault opened against AbaThembu King Buyelekhaya Zwelibanzi Dalindyebo by his son Prince Azenathi  Zanelizwe Dalindyebo was withdrawn by ...
News
7 months ago

The district municipality has made headlines for political instability in the council.

Malema said: “They had two councils because of the internal fighting in the ANC. We are resolving that on November 1.

“The people of OR Tambo must put a stop to that nonsense. Out of factionalism there will never be service delivery.”

The king and Malema were later welcomed in song by scores of EFF supporters at the Mandela Park sport field, where Dalindyebo reiterated his call for his nation to vote for the EFF.

Malema blasted premier Oscar Mabuyane and MEC Babalo Madikizela after they were named in a public protector report for allegedly misusing funds meant for the memorial service of struggle stalwart Winnie Madikizela-Mandela in 2018.

“The province is full of thieves and those two [alleged] criminals must just go to jail.

“The EFF will take money from the ANC councillors and build roads, because ANC councillors are stealing money and spending it on their families. We want to make sure that every house has at least one person with a job. There are jobs, but they give them to their relatives, boyfriends and girlfriends.

“We want children of KSD to work in that municipality. We want to build proper houses, not these [RDP] things of ANC. We are going to cancel tenders and employ security; cleaners directly.”

Malema, who visited Mthatha and Dutywa on Sunday, is set to visit Mdantsane and Gqeberha on Monday.