ANC president met with 'no electricity, no vote' placards while on campaign trail 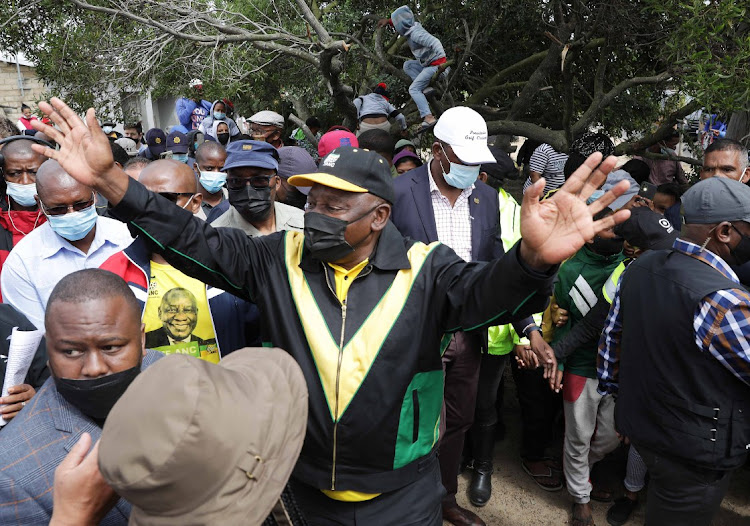 Angry Gauteng residents confronted ANC president Cyril Ramaphosa on the campaign trail on Monday, saying that if there was no electricity by November 1 they would boycott the party.

Responding to this, Ramaphosa said the threats were not justified and cautioned against parting ways with their political family.

“This is our family. We stick together whether we like it or not. We cannot be saying 'ANC out' because there is no electricity. It doesn’t work like that. Instead, we need to solve the problem,” he said.

Only the ANC could solve the electricity woes, the president said, just a week ahead of voting day.

Ramaphosa spent the day campaigning in Orange Farm, Soweto and Alexandra township, where similar issues over electricity, councillor disputes and lack of service delivery persisted. He made a slew of promises, including holding a celebration rally if the party secured a majority victory.

'The ANC is no longer using communities as voting fodder,' says Ramaphosa during Limpopo campaign

ANC president Cyril Ramaphosa on Saturday said he was not worried that his face and not those of ward candidates has dominated the party’s election ...
Politics
7 months ago

The party has been on a mission to take back major Gauteng metros after losing out in 2016. Ramaphosa urged voters to give the party another chance as it was undergoing a process of renewal and building better communities.

He used the campaign trail to sing the praises of the newly elected mayor Mpho Moerane, who he said was doing outstandingly well in his duties so far.

This after he compiled an extensive report regarding problems in certain townships and how these could be addressed.

“This is the first time I see a mayor with a plan of how he’ll solve problems. So I am so happy that he is here. He knows what your problems are. The good thing about him is that he identifies a problem, comes up with a solution and thereafter comes up with a budget and also looks at the metro’s overall budget to see if there will be capacity,” said Ramaphosa.

Turning back to electricity and load-shedding in townships, Ramaphosa attributed the electricity crisis to old power substations, Eskom debt, cable theft and mushrooming back room shacks, among other issues. He said residents were partially to blame for the crisis.

“Part of the difficulties we have with electricity are caused by us. Another important thing is that, when the ANC took over in 1994, electricity was only being enjoyed about 56% of the people, but today it is enjoyed by about 90% in the entire country. That's because of the ANC. As government, we want everyone to have electricity,” he said.

Ramaphosa added that SA was not the only country to grapple with electricity shortages.

“We are not the only ones in the world with this problem of electricity that is sometimes weak and sometimes strong. Even in California, America, some years back, they had power shortages for a long time. Even us, we are going through a power shortage phase. And we are solving it.”