Tone down the arrogance if you want to work together, Mashaba tells DA 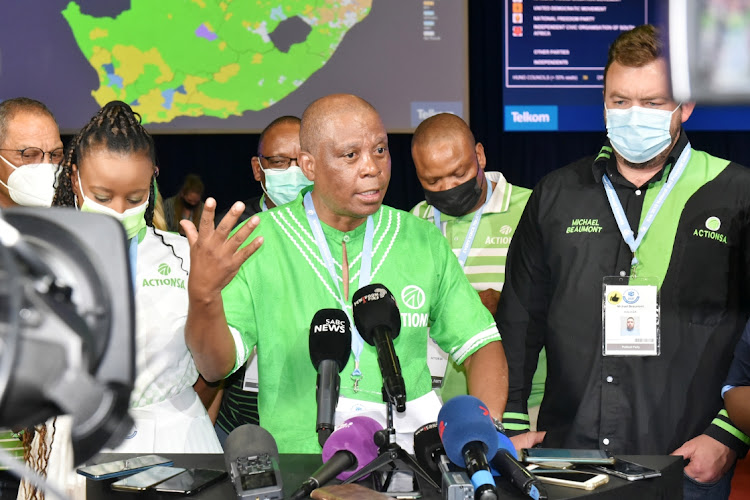 ActionSA leader Herman Mashaba said the DA will have to tone down its arrogance if the parties are to work together in coalition governments.

ActionSA and the DA are expected to coalesce with other smaller parties to form governments in the hung Gauteng councils where no party won a clear majority.

Mashaba revealed on Monday that the DA reached out to his party on Friday but talks could not proceed because two senior ActionSA members — Makhosi Khoza and Vytjie Mentor — were not available.

The ActionSA negotiation team asked the DA to give it time because of the unavailability of the pair. The DA said it would get back to the new party at the weekend, but had not done so by Monday morning, Mashaba told eNCA on Monday.

This seemed to irritate him.

“Remember the DA, when they met with our team on Friday, with John [Moodey] and Abel Tau, they said they will come back to us over the weekend. It's Monday and as far as we are concerned, up to now they've not spoken to us.

“We believe they had a FedEx over the weekend. We hear they are giving feedback to the media but they have not even had the decency to give us a date when to meet, so those are things that we are saying. What kind of negotiations are these?

The City of Johannesburg is likely to have a government of coalitions that will exclude the ANC if ActionSA has its way.
News
4 weeks ago

Mashaba said his party had serious concerns about some of the utterances made by DA leaders. He complained about “arrogance” in the blue party.

“I think the DA's arrogance is very dangerous for this country. It polarises the nation and I think if the DA is prepared to come down to the reality of democratic dispensation of this country.

“As long as the DA can recognise the fact that we live in the most unequal society in the world, we are happy to talk to them,” he said.

Mashaba denied that he wanted to be the mayor of Johannesburg at all costs.

“I wonder where is this thing coming from that I want to be the mayor of Johannesburg. Yes I campaigned to be the mayor. The voters gave us 16%. How can one become a mayor with 16% on our own?”

He claimed the demand for mayorship was the least of the issues that could prevent a coalition.

“The mayorship issue for us is actually, honestly, the least of the challenges that will make it difficult for a coalition. That's why I am saying, the DA for us, it's actually their arrogance and that is of very serious concern to us.”

DA woos ActionSA, ACDP and Freedom Front Plus as coalition partners but is ‘not desperate’

The DA says it has reached out to several smaller political parties – including ActionSA, the ACDP and Freedom Front Plus – with draft coalition ...
Politics
3 weeks ago

He accused his former political home of behaving as if it still controlled Johannesburg.

“Voters have punished them heavily here in Johannesburg but they still have the arrogance as if they control Johannesburg and they are very far from getting anywhere close to being the government in Joburg and in Tshwane as well — and Ekurhuleni.

“So, it's up to them. One thing's for sure is when they come to talk to us, they must come and talk to us with respect and leave the arrogance at the door. Otherwise they mustn't waste our time,” he said.

“We're the most corrupt country in the world, we are the murder capital of the world, we've got open borders, we can't work with such a problem,” he said.