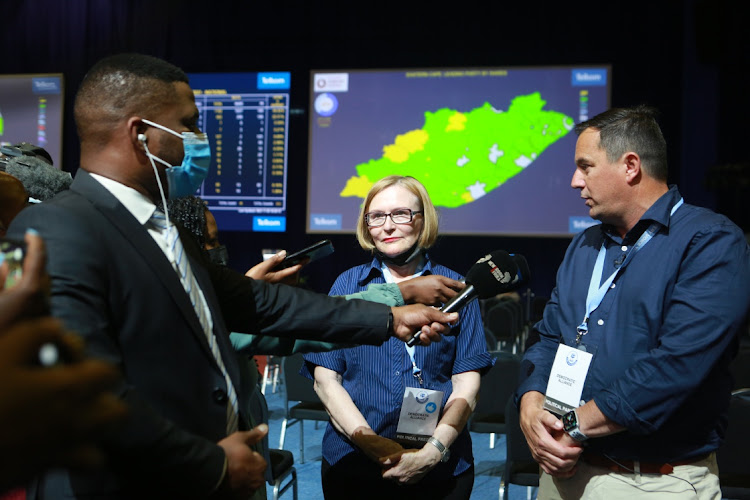 The DA's federal council chair, Helen Zille, stands next to DA leader John Steenhuisen as he answers questions from the media at the IEC results centre in Pretoria. File photo.
Image: Masi Losi

The withdrawal of the Patriotic Alliance (PA) from coalition talks has seemingly weakened the DA's strategy to unseat the ANC, especially in metropolitan municipalities.

In its attempt to weaken the ANC, the DA has lobbied several parties — including the ACDP, IFP, ActionSA, Freedom Front Plus and the PA — to form a majority of opposition that can form governments in municipalities.

These parties were locked in a meeting on Monday, having what the DA describes as bilateral talks.

However, the PA later pulled out of the coalition talks, seemingly weakening the opposition hand.

Without the PA, a DA-led coalition would make up only 129 seats instead of the required 136 in Johannesburg. The coalition needed the eight seats of the PA to meet the threshold.

DA leader John Steenhuisen and federal council chairperson Helen Zille have revealed that the PA pulled out because its leader Gayton McKenzie was insisting on discussing positions right at the onset when they wanted to base the coalition on principles.

DA woos ActionSA, ACDP and Freedom Front Plus as coalition partners but is ‘not desperate’

The DA says it has reached out to several smaller political parties – including ActionSA, the ACDP and Freedom Front Plus – with draft coalition ...
Politics
6 months ago

McKenzie is said to have told the DA outright that he would only consider agreeing to a coalition that will see his party benefiting from positions.

“Gayton McKenzie has been very direct about this right from our first discussions at the results centre in Tshwane. He said to me, 'Forget all about this stuff, what I’m interested in is money and jobs for my people and that is what we are going after,'” said Zille.

“So he was very direct, and when there is such a bad fit in terms of values, it’s obviously not an ideal marriage. One would never even think of signing an antenuptial contract with a partner who had such a fundamentally different outlook on the world.”

Steenhuisen has admitted that the PA decision to pull out and opt for a coalition with the ANC has weakened them.

“The implications for a place like Joburg are that it narrows the path to an opposition majority considerably,” said Steenhuisen.

“But we are not going to stop trying. We left the meeting yesterday, we committed to continuing the bilaterals that we’re having with other political parties and we commit to coming back at a later stage with those parties that were there yesterday — once they had taken the agreements back, once they have got advice from their national executives — to be able to see if we can hammer it out.”

When you read the Twitter feed and news interviews, you can see it’s all about patronage politics, it’s about dispensing jobs.

Steenhuisen found McKenzie's tweets announcing that they were going with the ANC “quite odd”, as they were only at the initial phases of their talks and had not rejected his proposals for mayoral committee positions.

“Quite odd because yesterday was the first engagement we’ve been involved in with the PA. We certainly did not take positions off the table but we said let’s start from a principled basis first — let’s agree on what we want to achieve in these municipalities, let’s agree on those values and principles that are going to guide the coalition.

“But of course they wanted to steer it to positions [and] how many mayco seats they can get. When you read the Twitter feed and news interviews, you can see why: it’s all about patronage politics, it’s about dispensing jobs.”

Steenhuisen described what McKenzie had demanded as patronage that would not really benefit voters.

“We want strong, stable governance that’s focused like a laser beam on service delivery, not on building patronage networks that inevitably end up with state capture, with capture of municipal entities and jobs for pals — and exactly the type of morass we have seen municipalities descending into across the length and breadth of SA,” he said.

Zille said there were few fundamental differences between the parties that met, who mostly agreed that for coalitions to endure they would have to be based on principles rather than positions. She said they had learnt this in previous coalitions in Tshwane and Johannesburg, which both collapsed.