‘We all started there, but we ended up somewhere,’ father told son 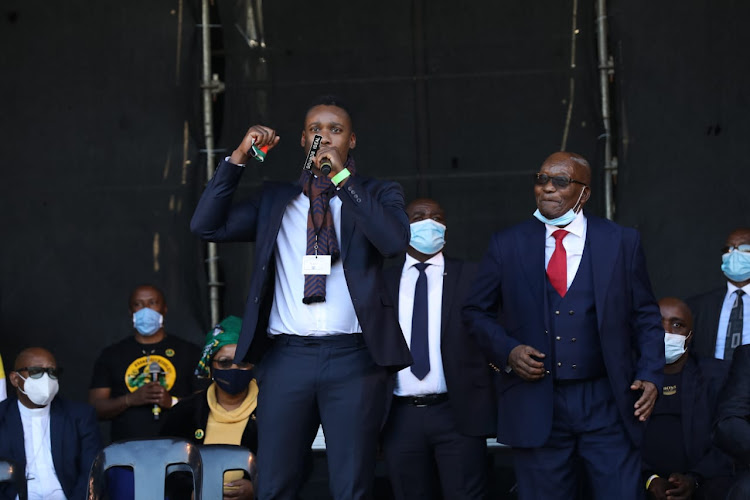 Duduzane Zuma with his father Jacob at a gathering at Freedom Park in Pietermaritzburg.
Image: SANDILE NDLOVU

There are the words of a chuffed Jacob Zuma to his son Duduzane, after he was elected chairperson of the ANC’s ward 11 branch in Newlands East, Durban.

Duduzane was elected last week after receiving overwhelming support for the role at a biennial general meeting.

This is essentially the first step in his mission to become a future ANC president.

In videos shared this week, the former president congratulated his son for his political ambitions.

Zuma said he started his political journey in the same place.

“I feel proud. We all started there, but we ended up somewhere,” Zuma told his son.

“The politics are important. Take the interests of branch members, supporters and the community in your area. It is a challenge and an important achievement you have made.”

Zuma highlighted the importance of Duduzane making the most of the role, saying he should make a difference.

“If you are a member of the branch, you have the opportunity to have discussions about the ANC.

“It’s always important to make the branch, make the difference within the organisation itself and within the community where you are, to be able to serve the community and therefore give that kind of leadership,” said Zuma.

Duduzane does not live in Newlands. He previously claimed to have family ties to the area, which is home to his wife, Shanice Stork.

“Just because I don’t live here doesn't mean I don’t spend time here. I have family in this community. My in-laws are here. Me not being here 100% of my time should not take away from the work that needs to be done,” he said.

“It is the same in many communities around the country. People leave and never look back. The whole idea behind what I’m trying to do is to come back and make a difference. These are the conditions of people I know.”

‘It is less of a dream but more of conversations’: Duduzane Zuma on running for president

Duduzane Zuma says his presidential bid is more than a dream, despite having no experience in politics.
News
8 months ago

Earlier this month, Duduzane told Power 98.7 his presidential bid was more than a dream, despite his lack of experience in politics.

He said the switch from businessman to politician lies with “decision-making at the highest levels”.

“It is less of a dream but more of conversations. I think over a period of time we all have these conversations about how we get involved in making a difference.

“I have been a businessman my whole life, an entrepreneur, and politics is very new to me. I’ve followed it, I have understood it and was a part of it.”