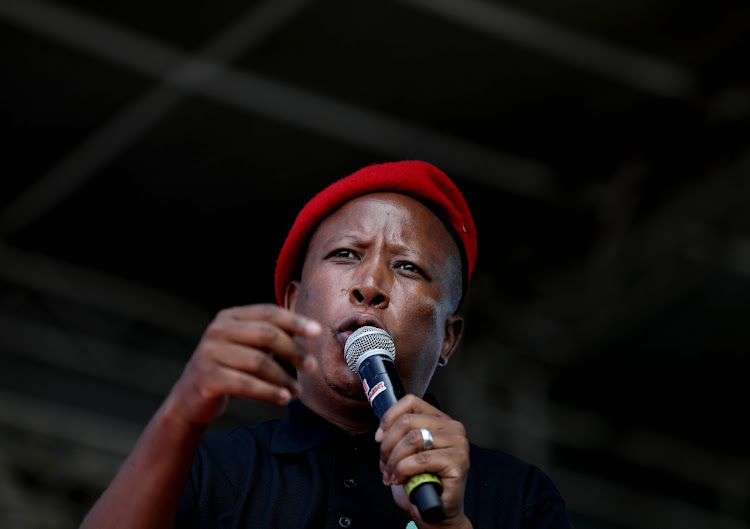 The EFF did not vote for the DA for coalition governments, but rather against the ANC, leader Julius Malema said on Saturday.

Speaking at his party’s Siyabonga rally in Durban, Malema said the EFF had achieved its mandate to collapse the ruling party in last year’s local government elections that saw the ANC vote dip below 50% nationally and the ruling party lose key metros to the DA in Gauteng.

Malema said the EFF could either vote for the ANC and thrust it back to power or vote against it to teach the ruling party a lesson.

Here are six fiery quotes from his address:

WATCH | Video of Malema calling for parliament to be sold resurfaces

We are not enemies with the ANC and IFP

“[President Cyril] Ramaphosa uses Covid-19 to hold on to power because he knows he can’t go to [Moses] Mabhida stadium. If he goes to the stadium, the people of KwaZulu-Natal will teach him a lesson. He wants VIPs who are regulated when they enter the stadium. We move freely.”

“We need our supporters in the stadiums so we can re-entertain society. We want our people to be entertained again. We are unemployed. We don’t have money to go to school. Entertainment can create a lot of jobs. A lot of people have lost jobs because of unreasonable lockdown regulations.”

“[eThekwini mayor Mxolisi] Kaunda hates black people. That is why when our people were killed in Phoenix, he only went to Indian communities but he never went to African communities.”