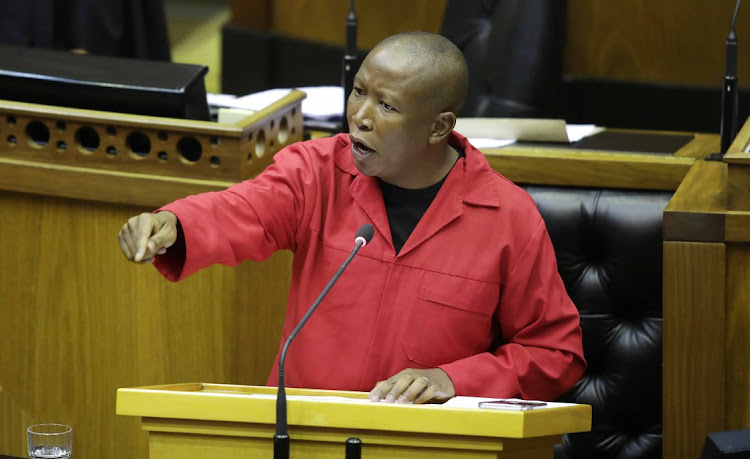 EFF leader Julius Malema says the ANC has proved correct the claims made by the red berets in 2013 that the ruling party had failed to fulfil its promise to liberate black marginalised South Africans.

Malema was responding to President Cyril Ramaphosa’s state of the nation address (Sona) during a debate in the Cape Town City Hall on Monday.

He said Ramaphosa was the worst president in history and claimed black South Africans have become poorer with him at the helm of the ruling party.

He said the 2021 local government elections, which saw the ANC’s national vote dip below 50%, demonstrated South Africans were losing faith in the ruling party 27 years after the dawn of democracy.

High levels of poverty, corruption and unemployment were some of the clear markers of the failures of the ruling party, said Malema.

More than 10-million South Africans who are capable of working and are willing to work cannot find jobs anywhere, and these are black people who were systematically excluded from meaningful economic participation under colonialism and apartheid

“SA has the highest levels of joblessness in the world and there is no believable programme and plan to create jobs for our people. More than 10-million South Africans who are capable of working and are willing to work cannot find jobs anywhere, and these are black people who were systematically excluded from meaningful economic participation under colonialism and apartheid,” said Malema.

Delivering the Sona last Thursday, Ramaphosa acknowledged the high unemployment rate but claimed it was the private sector, not government, that created jobs.

“We all know government does not create jobs. Business creates jobs,” the president said.

Malema said this statement demonstrated that Ramaphosa and his government had no concrete plan to eradicate unemployment and poverty.

“The former liberation movement has admitted it will not use its political power to develop the productive forces and create jobs for our people. It is also historically and empirically incorrect to suggest the sole role of government and the state is to create conditions for the private sector to create jobs,” said Malema.

EFF leader Julius Malema gave his opinion on the ANC succession debate, saying President Cyril Ramaphosa was not deserving of a second term.
Politics
3 months ago

“There is absolutely nothing you have done for black people. You seem to think each Sona is the beginning of a new term as president, which is why there is no consistency or implementation of your own objectives,” said Malema.

The debate will continue on Tuesday and the president will respond on Wednesday.