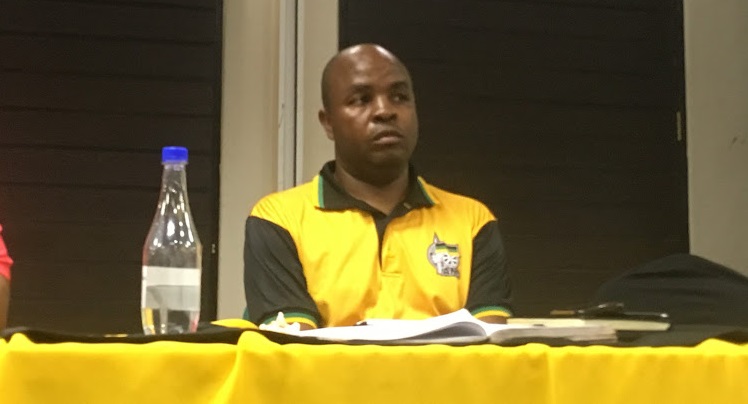 ANC president Cyril Ramaphosa played coy about the endorsement he received from Mandla Ndlovu, the party’s provincial task team convener in Mpumalanga, who called on him to accept nomination for a second term as the governing party president.

Ndlovu threw the province's support behind Ramaphosa on Monday morning and pleaded with him to accept nomination for a second term.

“President CR, if there will be calls from branches calling for your second term, don't say 'no' to that call,” he said.

Speaking to journalists at the end of his daylong visit to the province, Ramaphosa was coy when asked if he would avail himself as called upon by Ndlovu.

“Comrade Mandla said something, I’m hard of hearing these days. I did not quite hear what he said, but that’s not the issue,” he said, smiling.

The Sekhukhune region believes only Ramaphosa can save the party.
Politics
5 months ago

Ramaphosa visited Mpumalanga as one of three provinces identified by the party leadership as hotspots that needed intervention. KwaZulu-Natal and the Eastern Cape are the other two.

Emerging from the closed meeting, Ramaphosa described the gathering with ANC branches as wonderful.

“The branches all gathered here and I had a wonderful exchange of thoughts and views with them. It was the most wonderful meeting,” he said. “There was a display of unity, or purpose, in the meeting.”

He said an agreement was reached that the provincial conference should be held as soon as possible and that a date will be set soon.

EFF leader Julius Malema gave his opinion on the ANC succession debate, saying President Cyril Ramaphosa was not deserving of a second term.
Politics
4 months ago

He said the province had done all the preparatory work at branch level that qualified to go to conference.

Ramaphosa revealed that he raised the issue of unity in the meeting because “there has been quite a bit of disunity among them and I stressed the benefits of unity and to choose a leadership that will unify the province and that will take the province forward”.

The meeting dealt with the ANC’s  electoral performance in the province.

“As much as they did not decline like in many other places, they did decline, and we went through the reasons why they declined from high percentages,” he said. Ramaphosa described Mpumalanga as an “80%-performance type of province”.

He said a number of reasons were put forward for the returns that the ANC got and these ranged from the short time to campaign, unavailability of electoral material and paraphernalia, service delivery challenges and divisions in the party.

“I think now that we are going through this cathartic moment, people are going to get to grips with what needs to be done,” he said.

Fired ANC member and Umkhonto we Sizwe Military Veterans Association spokesperson Carl Niehaus has come out guns blazing about the endorsement of ...
Politics
5 months ago

More assessments will be done at subregional level all the way down to the ward level, said Ramaphosa.

“I’ve given them a task to also go down to the ward level. So they will be able, at a branch, to do their own assessment so that we have a better understanding,” he said.

The ANC dissolved its Mpumalanga provincial executive committee last week and put in place a task team to oversee the province until its elective conference.

The province was expected to hold its elective conference by the end of February but has not been able to for undisclosed reasons.

Mpumalanga has not held a conference since the departure of David Mabuza who was elected deputy president in December 2017.