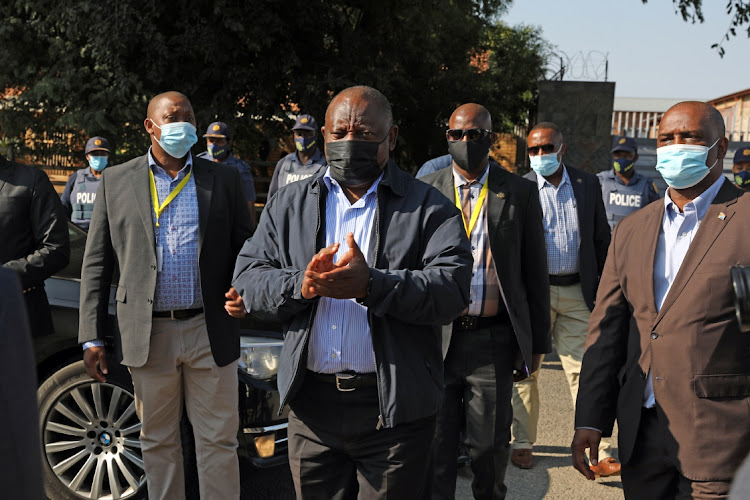 This comes after a meeting of 11 political parties, all represented in parliament, on Tuesday to discuss “issues of national importance”.

The meeting was spearheaded by UDM president Bantu Holomisa. He said parties discussed a number of issues, including dealing with the recommendations of the state capture inquiry, coalitions and security threats in the country.

“We discussed the issue of state security apparatus and that we are concerned about that,” said Holomisa.

He said there was a fear the country was vulnerable because state security appeared to be in tatters while Ramaphosa dragged his feet on implementing the report produced by a panel chaired by Sydney Mufamadi which uncovered shenanigans at the state security agency (SSA).

Minister in the presidency Mondli Gungubele believes there is a deliberate attempt to undermine the state by people "who have been found wanting".
News
4 months ago

“We discussed the state of security in the country, including the 2021 mayhem [looting and violence after Jacob Zuma's incarceration] and so on, as well as threats to national key points,” said Holomisa.

He said these included the fire in the National Assembly building this year and the fire at the Waterkloof air force base, incidents at the Constitutional Court and the vandalism and looting of railway lines.

“Infrastructure has been destroyed by people we don’t know. Eskom says they suspect mischief and sabotage. There is lawlessness in general. We took a resolution that we must meet the head of state, the president, to express our concerns as leaders,” said Holomisa.

He said the political parties expressed concern that Ramaphosa and his government no longer consults political parties over Covid-19 and regulations under the state of disaster and resolved to meet speaker Nosiviwe Mapisa-Nqakula.

Holomisa said they were also concerned that parliament was not functioning and it was difficult to hold members of the executive accountable.

“We don’t want to conclude that parliament was burnt down deliberately to avoid accountability.”

Holomisa said they would ensure oversight, especially in committees that deal with law enforcement agencies tasked to deal with state capture cases.

“We agreed that the whips of the opposition parties will work together and make sure  when they go to those committees they speak from the same hymn book.”

Holomisa said they discussed coalitions and want rules established to enable enough time to form coalition governments. He said they will engage government so they can establish guidelines to rule coalitions.