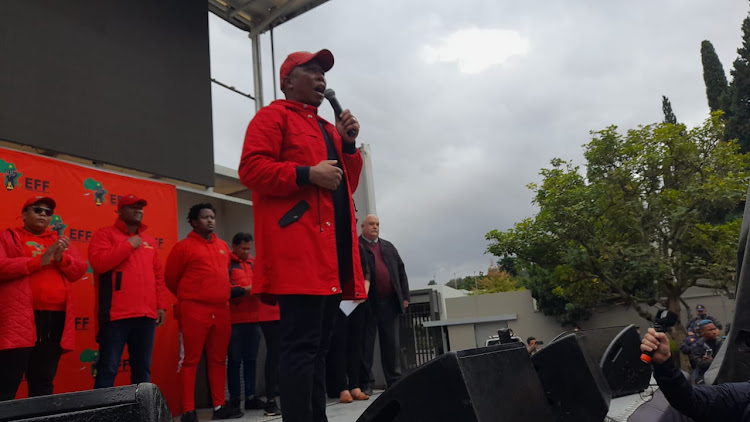 EFF leader Julius Malema has labelled white land owners who inherited land from their forefathers as criminals and called on them to give the land to black people.

Speaking during a picket organised by his party outside business mogul Johann Rupert's farm in Stellenbosch on Wednesday, Malema said white people arrived on SA’s shores led by a “convicted criminal” Jan van Riebeeck in 1652.

“They arrived here and took our land,” Malema said.

“They killed our forefathers. They raped our mothers. They stole the cattle and now they have settled here. They call this place their place but deep down they know they have stolen from us. Whether it is the ones who are living now or not, as long as you are in possession of stolen goods you are a criminal because you inherited this land,” Malema told EFF supporters.

Crowds gathered in Stellenbosch on Wednesday ahead of an EFF picket at business mogul Johann Rupert’s farms.
Politics
2 months ago

Malema claimed the Rupert and Oppenheimer families were the face of a land crime that was committed in this country. 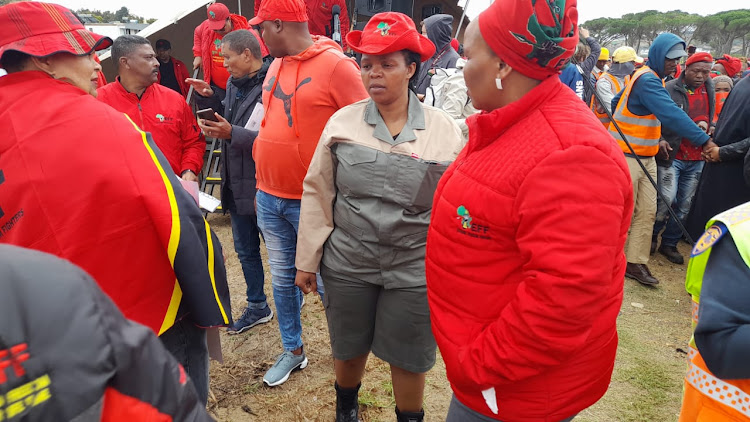 EFF supporters sang and danced as they marched through Stellenbosch to hand over a memorandum of demands to businessman Johann Rupert.
Image: Philani Nombembe

He addressed the alleged exploitation of black farm workers, saying some were paid with alcohol.

“You are not rich because you are smarter than us. You are rich because your forefathers committed a black genocide and stole our cattle and killed our leaders and took everything that belongs to us,” he said.

“The sea belongs to us, the minerals of this country belong to us and we demand that all of those things must be returned to the hands of the rightful owners. We are here today to confront white monopoly capital. We, as the EFF, exist everywhere. Here in Stellenbosch, we exist and the programme of land expropriation starts, it will also start from here in Stellenbosch and we will reclaim our land.

“You must be ashamed that our people live in squalor in Kayamandi and you stay on wine farms, in the suburbs. There is no other settlement for black people, the indigenous people — the rightful owners of this Stellenbosch. They don’t have any other place. They are squatting in Kayamandi. You don’t give them the smallest piece of land so that they can live comfortably like you.”

The picket, dubbed “Land Day”, will see Malema and Shivambu “confront” the billionaire about land issues.
Politics
2 months ago

Malema claimed whenever a black person tried to buy land, they were blocked by white farm owners. He called on Rupert to release land voluntarily.

“You have got enough land, Rupert. Release some of it voluntarily now before the land revolution visits you. All those white people who have a lot of land, lot of properties, lot of wealth, please start sharing it with the people of SA because they are losing their patience,” Malema said.

“This youth is here today during working hours in their numbers because they are not working and because they have no land to work on.”

He said black people were poor because they do not own land.

“That is why I always argue with South Africans who are beating a Zimbabwean. They are not the cause of your problem. They don't own the land,” he said. “You must go to those who own the land. When you get the land, your problems are solved.”

He then laid into Jan van Riebeeck.

“Their (white land owners) problems were solved since they came here since April 6 1652 led by a gangster, a convicted criminal Jan van Riebeeck,” he said.

“They arrived here and stole our land. These are children of criminals. Jan van Riebeeck was brought here as part of his punishment. He didn’t come here because he was a good tourist who spotted a beautiful land. He is a thug, even where he comes from he is a criminal. That is why he continued with criminal activities by stealing our land and our cattle when they arrived here.”

The EFF handed over a memorandum of demands to Rupert's representatives while a heavy police contingent kept a watchful eye.

Broadcaster Redi Tlhabi has thrown shade at the EFF's march to Johann Rupert's farms on Wednesday, suggesting the businessman may give the party some ...
News
2 months ago