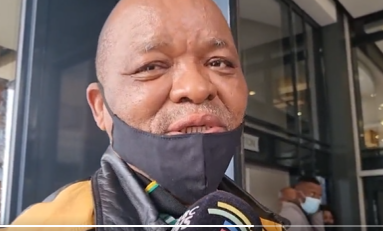 There is no faction bigger than the ANC.

These were Gwede Mantashe's partying words at the ANC Eastern Cape conference where he he cautioned delegates not to allow conference fever to cloud the fact they were ANC members first. Gwede's is the party's NEC member and national chairperson

Mantashe was speaking at the East London ICC as conference delegates made their way inside.

“Swiping at one another as if there's no tomorrow, as if we're enemies is destructive. If you think a faction winning is victory then it's a hollow victory.

“Victory is the selection of the best leadership. When there are gaps in between, the leadership at the top will collapse.

When you divide us, you must realise you're making us weaker. That faction has a limited capacity to build the ANC,” he said.

Mantashe commended both contestants the candidates vying for positions for leading a campaign that did not result violence among the lobby groups.

“A strong and united ANC in Eastern Cape will send message there’s an opportunity to revive ANC nationally.

“If you're divided post conference, the slightest chance of renewing the ANC nationally will disappear,” Mantashe said.

After Mantashe finished addressing delegates branches went back and forth with provincial leaders about the seating arrangement.

Delegates linked to Mabuyane were the first to arrive occupying the majority of seats. Those from the Maliya faction arrived later with some standing during the earlier session of conference.

During a press conference earlier on Saturday, provincial coordinator Lulama Ngcukayitobi said there were 1,500 voting delegates including 200 guests invited by the PTT.

Former provincial treasurer Mlungisi Mvoko managed to settle things down by telling delegates seating would be sorted once they got to the confidential reports.