WATCH | Ramaphosa has failed to deliver on promises made during Sona, says Thabo Mbeki

Former president fears SA may ‘explode’ as result of unemployment, poverty and lawlessness 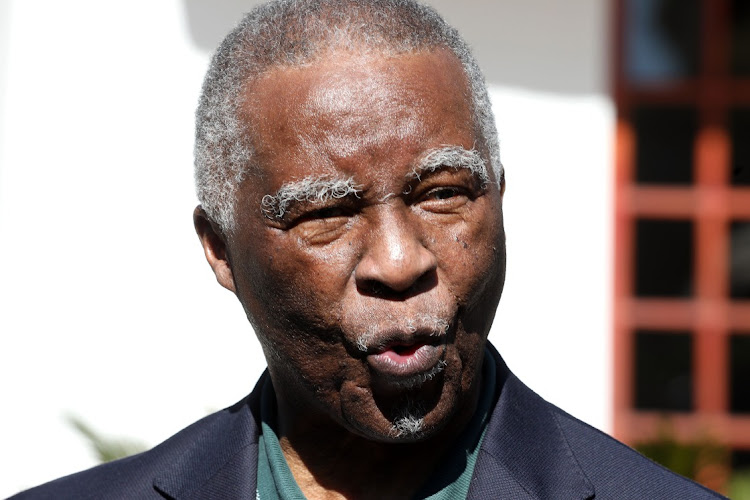 Former president Thabo Mbeki says there is no national plan to address a number of social ills, including poverty, unemployment, criminality and inequality.

To some extent, he blames President Cyril Ramaphosa, who he says has not delivered on a promise made earlier this year to address the challenges.

“Comrade Cyril Ramaphosa, when he delivered the state of the nation address (Sona) in February, said ‘in 100 days there must be an agreed comprehensive social compact to address these matters’. Nothing has happened, nothing,” Mbeki said on Thursday evening.

He was addressing the national memorial service for the late ANC stalwart Jessie Duarte in Johannesburg.

“I am saying to honour the legacy of comrade Jessie, you’ve got to do something about that,” he said.

Duarte, who died after a long battle with cancer, was buried on Sunday. She had been on medical leave from her party position and responsibilities as deputy secretary-general.

The attendees held the anti-apartheid struggle stalwart in high regard and called for her memory to be honoured in the best way possible.

Mbeki said she must be honoured in practical and meaningful ways.

Tackling social ills, including unemployment and poverty, are ways in which Duarte must be honoured by the ANC, suggested Mbeki.

He said as a revolutionary, Duarte understood service to the people, respect for the truth and that the ANC’s existence was to serve people with no expectation of reward, except that of fulfilling people’s aspirations.

Reflecting on SA’s state of affairs, the former president likened it to the “Arab Spring” uprisings which saw protests that ultimately resulted in regime changes in countries such as Tunisia, Egypt and Libya.

Mbeki said the uprisings took place because problems had been brewing under the surface, as is the case with SA.

“ One of my fears is that one of these days it’s going to happen to us. You can’t have so many people unemployed, so many people poor, people faced with lawlessness, faced by leadership in which they see ANC people one after one another called corrupt.

The retired former president said he has in recent months received invitations to visit provinces, an experience which he said brought him closer to ordinary members of the party.

Former president Thabo Mbeki says South Africans are justified in concluding that some ANC members are liars and thieves.
Politics
2 months ago

Reflecting on the visits, Mbeki said many members were gravely concerned about the state of the party but were committed to rebuilding itand returning it to its former glory.

“That gives hope that we can do the things that would show our respect for the legacy of Jessie Duarte.”

Mbeki said the ANC ought to be a non-racial movement but was not.

“Because we are sitting here on the platform and can see we are not a non-racial audience. It’s a point that something is wrong.

Deputy president David Mabuza, while giving a eulogy, said he agreed with Mbeki that the ANC must walk the talk and exemplify Duarte.

“We are weaker without her sharp intellect, compassion, hard work and effective mobilisation skills,” said Mabuza.