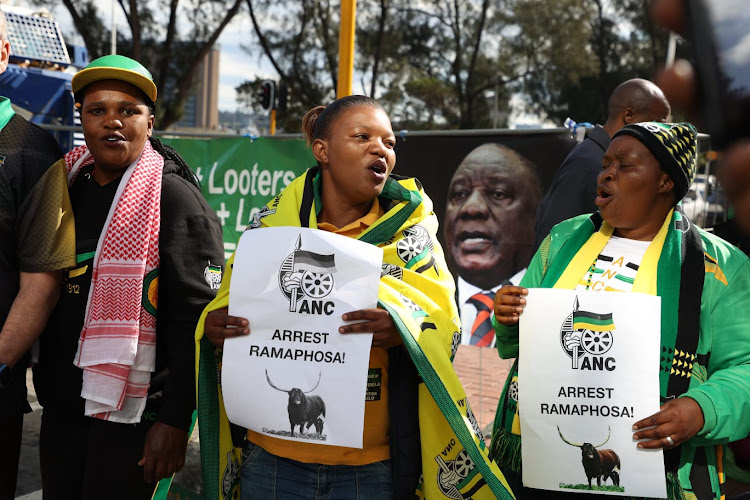 Former president Jacob Zuma’s supporters, including his eldest son Edward, have vowed to make it difficult for President Cyril Ramaphosa until he vacates his office.

Edward was among a handful of people who were picketing outside the ANC's ninth elective conference in KwaZulu-Natal, which saw the election of Siboniso Duma as provincial chair in the early hours of Sunday.

Zuma's supporters had promised to disrupt Ramaphosa’s speech if he had attended.

The party president was billed to attend the highly contested conference but pulled out at the 11th hour, apparently because he “had other commitments”.

While this was confirmed by both the newly elected Duma and former provincial spokesperson Nhlakanipho Ntombela, there was a high level of security in and around the Olive Convention Centre in Durban where the conference is taking place.

Presidential protection unit members were spotted at the venue earlier this week, presumably to sweep the venue.

President Cyril Ramaphosa, who was billed to attend the ninth provincial elective conference in KwaZulu-Natal on Sunday, is no longer available.
Politics
2 weeks ago

Edward Zuma said: “We are still to be told by the leadership of the NEC but if ever Ramaphosa does come, we will be protesting as we are protesting now. I think it is high time as people of SA and the ANC we raise our concerns and stop being afraid of engaging leadership.”

Zuma said South Africans were feeling the pinch with the high cost of living.

“Former president Thabo Mbeki said something very important and it should not be taken lightly. We might be seeing another Arab Spring as well here in SA. We are tired of Ramaphosa, he must leave before the [elective] conference. He must leave now.”

Zuma, who is from the Msholozi branch in Nkandla, Musa Dladla region, said: “As a member of the ANC, I am saying I am not in support of this man. He has failed the ANC, killing the ANC.”

He added: “We did not threaten anyone. We were going to react to his presence. We are tired of him. Whether he feared what he thought what we would do, we have done it, whether he is coming or not [sic].”

Another Zuma loyalist, Carl Niehaus, said it was interesting that Ramaphosa was no longer available to attend the conference.

“Out of the blue he has other commitments. Obviously he is running away and he has seen the mood here in KwaZulu-Natal and saw that he will not be welcomed,” he said.

The ANC has elected new leaders in the key region of KwaZulu-Natal, though it remains unclear whether the new collective will back President Cyril ...
Politics
2 weeks ago

Niehaus said he was happy that “the penny has dropped for Ramaphosa”.

“The message that we are delivering here is that he must go immediately. You saw the outcomes of last night’s elections were. It was a resounding rejection of the administration in KZN that worked closely with Ramaphosa.”

He said this was an indication that South Africans wanted change.

“It is going to get much worse for Ramaphosa at the policy conference. We will deal decisively with him there.”

Among their demands are that the policy conference be turned into a national general council and that those who have been forced to step aside, especially suspended secretary-general Ace Magashule, be allowed to return to their positions.

Another Zuma supporter, Nkosentsha Shezi, told TimesLIVE he was disappointed Ramaphosa was not coming.

“I think our conference went very well for it to be infringed by Ramaphosa [sic] … We did not need him at our conference. We have elected a very capable and willing chair of this province and he will give us a closing speech.”

The nomination for the additional provincial executive committee members continued on Sunday.