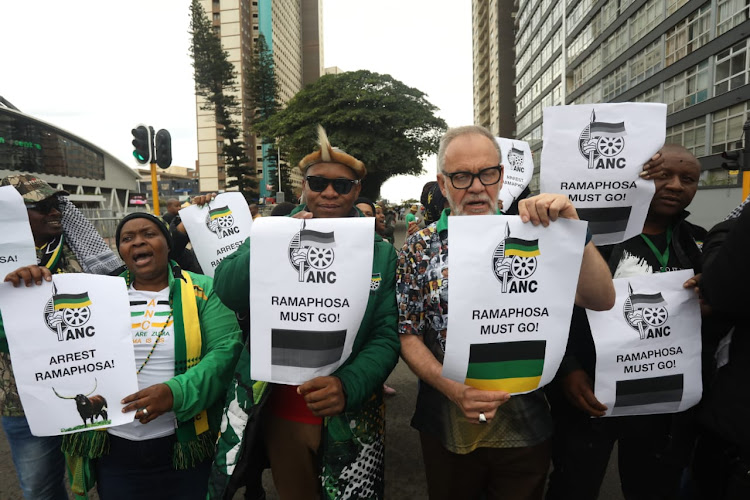 Supporters of former president Jacob Zuma protest outside the Olive Convention centre in Durban where the ANC provincial conference is being held
Image: Sandile Ndlovu

President Cyril Ramaphosa, who was billed to attend the closing of the ninth provincial elective conference in KwaZulu-Natal on Sunday, is no longer available.

This was confirmed by former spokesperson Nhlakanipho Ntombela who said, “He is no longer available.”

Speaking to Newzroom Afrika, newly elected chair Siboniso Duma also confirmed that Ramaphosa will not show his face “due to other commitments”.

“We have just spoken to the president this morning and he has congratulated the collective but he already had other commitments for today. So he is not going to come and close.

Duma said this was not an indication that Ramaphosa was snubbing the conference as he did not close the recently held Gauteng conference.

KZN premier Sihle Zikalala has been voted out of the position of ANC provincial chairperson.
Politics
3 weeks ago

Acting ANC secretary-general Paul Mashatile had confirmed that Ramaphosa would be attending the highly contested conference amid fears of how he would be received in  former president Jacob Zuma's stronghold.

On Friday evening, Zuma's ghosts came crawling out of the shadows with delegates demanding through song to know: Wenzeni uZuma? (what has Zuma done?). They were expressing their dissatisfaction over Zuma’s incarceration.

There were two dominating factions in the conference, mainly the Talibans and Ankoles. The Talibans are said to be linked to disgraced politician Zweli Mkhize, while the Ankoles are a faction supporting Ramaphosa.

Nomagugu Simelani is the only woman to be elected to the top five as deputy chair, while Bheki Mtolo is the secretary and Sipho Hlomuka is his deputy.

Nomusa Dube-Ncube, who was nominated from the floor, failed to meet the threshold.

The ANC has elected new leaders in the key region of KwaZulu-Natal, though it remains unclear whether the new collective will back President Cyril ...
Politics
3 weeks ago

Additional members of the provincial executive committee are expected to be nominated and elected on Sunday.

Duma, who locked horns with his predecessor Zikalala, got 930 votes while the latter received 665.

Mtolo, who was a favourite, beat Ntuli, receiving 894 votes. Ntuli got 699 votes.

Hlomuka secured the deputy secretary position with 895 votes while Boyce only managed to secure 689 votes.

On why there was only one female in the leadership, Duma said: “This is something that is going to be addressed ... But for us it is a historic moment because Nomagugu Simelane is the first deputy chair in KZN. The top five is not the structure, the PEC will constitute of more women.”