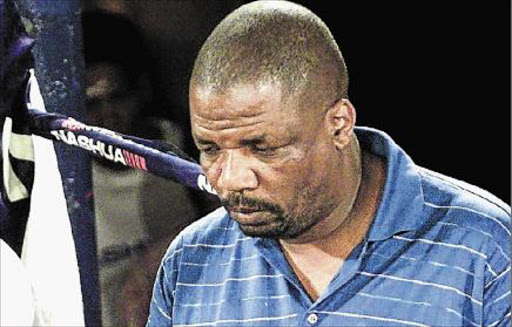 Mzi Mnguni
East London promoters have taken upon themselves to ensure that boxers belonging to their ailing counterpart Mzi Mnguni are not left behind in activity.

Since Mnguni fell ill for the second time following a stroke in March, his boxers have been enjoying activity under the banners of other promoters.

This is a unique scenario when one would have expected the promoters to capitalise on the unfortunate situation by luring the boxers away from him.

“I think every promoter here owes it to Bra Mzi to at least keep the fires burning at his boxing club by helping his boxers get action,” Sijuta Promotions’ Andile Sidinile said.

Sidinile billed Mnguni’s boxers Phila Mpontshane and Lulamile Booi in his tournament at the Wild Coast Sun in Mzamba a fortnight ago. In the show Mpontshane scored a third round stoppage win over Booi in a lightweight bout to improve his chances of challenging for the SA crown.

And tomorrow Sidinile will again bill Mnguni’s boxer Vusumzi Bokolo who will take on Thanduxolo Gatyeni in a lightweight non-title rematch as part of the boxing extravaganza at Selborne Park Tennis Stadium.

Speaking about the chance to feature in Sidinile’s show, Bokolo said he was grateful that the promoters were not forgetting them in these trying times.

“I promise to deliver excitement that I am known for,” Bokolo said.

“I do not want to talk about what is going on with Boxing SA and their approval of title fights.”

“I will keep using these opportunities to keep winning and I want to issue a warning to every boxer that once beat me to be on the lookout because I am on a mission to avenge my losses.”

Gatyeni stopped Bokolo in the first round of a wild shootout when he was still known as Dyani. The bout took place in the junior-lightweight when Bokolo was still under former world champion Welcome Ncita’s guidance.

He says he has since matured and the fact that the bout will take place in the lightweight division, which is his natural weight class, will help him gain revenge.