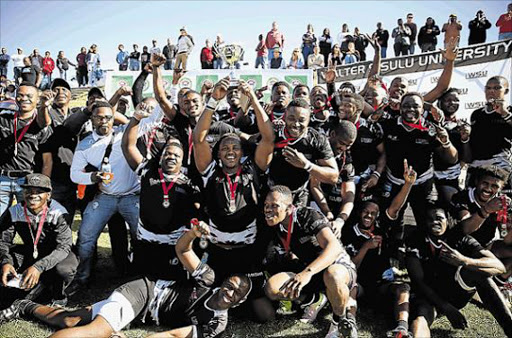 Walter Sisulu University's All Blacks pulled off an inspired extra time performance to book a place in the Varsity Shield tournament by beating Rhodes 30-13 yesterday.

The host team scored three tries in extra time against Rhodes University after the game ended in a 13-all stalemate during the University Sport South Africa (USSA) Rugby Week.

Section C player of the tournament Lelo Gemashe said the victory was a result of discipline being shown by his team.

He said they were ecstatic as they had been working hard to get in to the Varsity Shield.

“We have been through ups and downs trying to get to the Varsity Shield. We have worked to a point that we knew that in 2017 we have to participate in the (Varsity Shield) tournament,” said Gemashe.

Being the host of the East London-held competition also added extra pressure on them said the WSU captain.

Rhodes University seemed to have run out of steam in extra time as they could not add to their two tries by Mambu Jolomba and Marcus Nel and a penalty by Dylan McCanne.

Winners in Section A of the tournament, University of Pretoria's Tuks, beat tournament favourites Stellenbosch University. The physically contested game ended 20-10 after fulltime. Tuks' tries were scored by WJ Strydom and flyhalf Marcel Steyn-Scholtz, who also converted both tries, and scored two penalties to take his game tally to 15 points.

“You play rugby to enjoy it. That's the way we play rugby,” he said.

The coach had high praise for his forwards who kept the pressure on their opponents.

“Our forwards are strong, especially in these conditions,” he said.

Section C player of the tournament was Aphiwe Dyantyi from the University of Johannesburg.

The tournament's Section B was won by Wits who triumphed over the University of Western Cape.