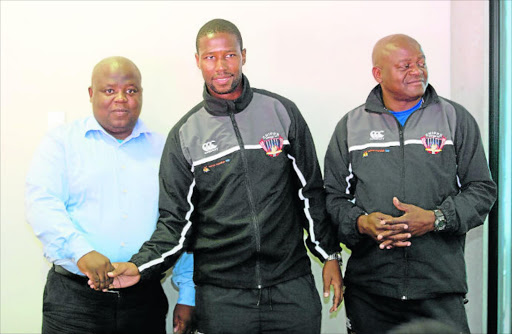 Chippa United boss Siviwe Mpengesi yesterday unveiled the 13 new players he has signed in his bold attempt to bolster his squad for the upcoming Premier Soccer League season.

The marquee signing was undoubtedly 26-year-old former Kaizer Chiefs, Orlando Pirates and Bafana Bafana striker Bongani Ndulula, who was born in Aliwal North and is commonly known as Drogba.

Besides the new players coming in, there are also three players returning to the Port Elizabeth-based side in Veeplaas-born defender Sipheseihle Stuurman (from Vasco Da Gama), former Baroka goalkeeper Veli Muthwa and Kristopher Bergman, who was on loan to Cape Town All Stars last season.

Mpengesi hinted that three more defenders would be joining the team. “Menzi Masuku from Pirates will be joining us. Today we will be finalising our deal with Marc van Heerden and we are also in talks with James Okwousa. But, we are likely to conclude his deal soon.”

After his contract expired with Chippa, Okwousa was said to have signed a pre-contract with Orlando Pirates but the deal is not sealed.

The Chilli Boys had an impressive run in the PSL last season finishing sixth on the log, booking themselves a place in the MTN8 competition, which is due to start in mid-August.

“We hope that this season we will continue to perform because the type of football that is played by Chippa United is how we define ourselves,” said Mpengesi.

He said many of the new players are from the ranks of the National First Division because Malesela believes the team has enough experience.

Malesela said this season they had signed more defenders and midfielders because they fell short last season when it came to replacing players due to injury or suspension in those areas.

“At some stage we had to sort of have a nightshift player and push a defender in the middle so to speak, to close the gap,” he said. “We have also signed a number of defenders because we have lost defenders. There are probably two more coming in and then we close shop.”

Malesela said they had thought long and hard before giving the green light on players.

He said the players that he has brought into the team are players who will compete – not only in the league but in the club.