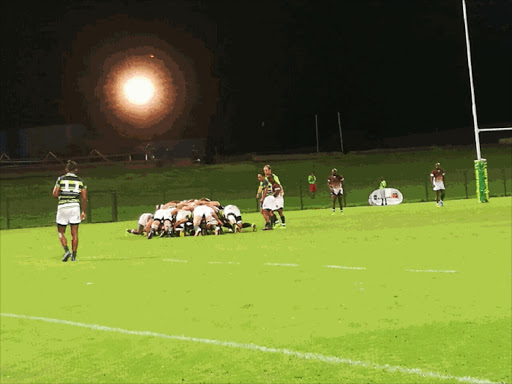 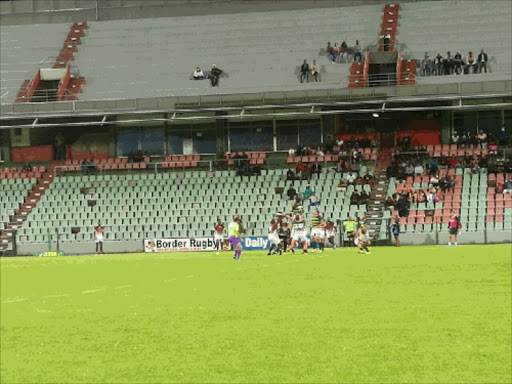 An attacking match saw both teams score six tries each, although both defences were found wanting a number of times.

It was the boot of Bulldogs flyhalf Oliver Zono that proved the difference in the end as he slotted all of his shots at goal, while fullback Ntabeni Dukisa kicked one conversion, with the 100% kicking effort winning the match.

The Bulldogs did have to put in some great last minute defence with the Eagles on attack in their half after the hooter, with their attack finally being bundled into touch to end the game.

“It was a hard fought team battle, SWD showed some guts, but we came out on top in the end,” said Bulldogs coach David Dobela.

“I am happy to get the full house of points, and it has been a good start to the season.”

The Bulldogs started the match with a bang, as some impressive running from the backs saw them take a 14-0 lead in the first 12 minutes.

An Eagles mistake led to first Bulldogs try as on attack on half way Eagles fullback Leighton Eksteen tried to chip and chase but kicked the ball straight into touch.

From the resulting line out the ball is spread down the line where inside centre Lunga Demezweni made a break before being brought down in the 22m, with the ball then spread to flank Johannes Janse van Rensburg who crashed over the line to the left of the poles for a converted score.

Another good break four minutes later down the right hand touch from Michael Makase ended with the ball passed inside to Ntabeni Dukisa who went over untouched.

Bulldogs lock Wandile Putuma making his 50th appearance for Border then made his presence known, stealing two Eagles line outs in the Bulldogs half.

A yellow card to Border scrumhalf Sinovuyo Nyoka in the 23rd minute then brought the Eagles back into the match, after he hauled the Eagles rolling maul down in the Bulldogs 5m.

First Eagles eighth man Christo du Plessis came off the back of a scrum to go over in the left hand corner, before flyhalf Quaid Langeveldt stepped through the Bulldogs defence on the half way line, before putting on the after burners to score in the right hand corner.

Eagles fullback Leighton Eksteen kicked one of the conversions to make the score 14-12 after 30 minutes.

The Eagles then took the lead at the end of the first half through wing Adri Jacobs, with Eksteen's touchline conversion giving the visitors a 18-14 lead at the half time break.

The Bulldogs started the second half much like the first, except this time they managed three tries in the first 13 minutes.

First they made their way into the Eagles 5m, before earning a penalty, with Nyoka taking a quick tap and popping the ball to eighth man Sokuphumla Xakalashe to crash over.

Putuma then made amends for knocking the ball on, on the line, by smashing over, before flank Lukhanyo Nomzanga added his name to the scoring sheet, with all three tries under the poles allowing Zono to easily slot the conversions.

With a 35-19 lead Border looked as if they might run away with it, but poor discipline gave the Eagles a chance.

First Makase connected with an Eagles player competing for the ball in the air in the 56th minute and then Zono trapped the ball illegally on defence in Border's 22m in the 63rd minute.

This allowed the Eagles to score with a big overlap in the 64th minute through centre Wilneth Engelbrecht.

Makase however redeemed himself on his return to the field as he finished off a fantastic Bulldogs counter attack, after they attacked from their own 22m, with Dukisa's conversion putting them 42-26 up.

The Eagles however made a dramatic fight back in the last 10 minutes as replacement hooker Jan van der Merwe rumbled over and then reserve utility forward Daniel Maree dotted down, allowing them a chance to snatch a dramatic win, but the Bulldogs held out to seal the victory.