Academy star has all the makings of a saddle king 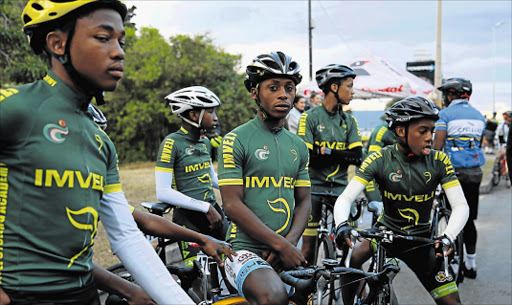 The 17-year-old Meintjies produced a fantastic solo ride to become the first junior home overall in the main 102km race, while also finishing in 11th place overall beating some of the biggest names in SA cycling.

“This was not my first time at the race, but this is the best I have ever done in it,” said Meintjies.

“Today (Sunday) I felt great, it was an amazing race and I gained more experience by racing with the pros.”

With massive teams taking part in the race, such as Rand Water Transnet, Giants, BCX and Bestmed NMU, Meintjies rode among the front riders and beat some very strong cyclists, like Evan Carstens and Bernard Esterhuizen from the Giants team and Wesley Eslick from BCX, who were all considered among the pre-race favourites.

“My plan on the road was just to stick with the pros and beat some of them and I managed to do that so I was very happy,” admitted Meintjies. My goal before the race was to win my category and I did that, so I hope that it will help me get noticed.”

Meintjies is in Grade 11 at Newell High School and has to juggle his cycling and school commitments throughout the year.

He has been cycling for Imveli for the past two years after leaving his previous cycling club.

“He is one of the top riders in the club,” said Imveli Cycle Academy's Lukholo Badi. “He was noticed earlier this year at the Herald cycle tour when he rode with the pros for the first time, and he stuck with them for most of the race, so he is definitely showing how good he is.

“We would love to keep him at Imveli, but if he is offered a better opportunity than us we would let him go, as it would also boost the morale of the other riders to see what you can achieve with hard work.”

Meintjies was also a part of an awareness ride through Mdantsane on Saturday afternoon, organised by Eastern Wheelers Youth Cycling club and Imveli, where 40 to 50 riders from various clubs, including a few pros from the Bestmed NMU team.

“I enjoyed to be a part of that because it showed people that cycling is a sport that you can do and is accessible to them if they want to take part, so I hope it well help more people come and take part in cycling,” claimed Meintjies.

Meintjies will now be looking on to his next race, which is the Bestmed Makro Cycle Tour taking place in PE next month and he will hope to impress once again.