Karatekas on brink of realising their dream 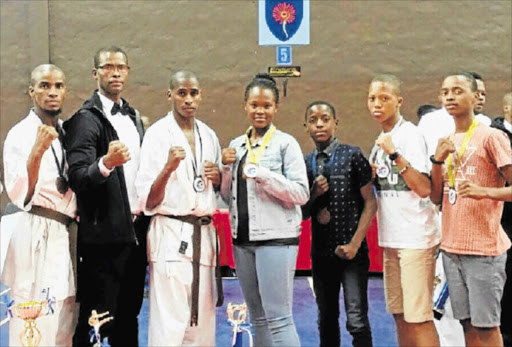 FISTS DO THE TALKING: From left, Sithembele Mtete, coach Simphiwe Dlulane, Litha Mthalalisi, Nande Dlulane, fellow karatekas Asamkele Ngcanga and Liyema Dweni, and Sonwabise Dokolwane pose together at the Karate South Africa tournament in Pretoria earlier this year
Four East London karatekas could be in for the chance of a lifetime when they represent South Africa at two world championship events in Japan and Russia in the next six weeks.

Two students, namely Sonwabise Dokolwana and Nande Dlulane, will compete at the World Youth Karate Championships in Japan on the 25th and 26th of this month, while the other two, Litha Mthalalisi and Sithembele Mtete, will participate in the Kyokushin World Union (KWU) Karate World Championships in Ekaterinburg, Russia on December 9 and 10.

All four karatekas come from the East London Kyokushinkan Karate club and will be hoping to do their country proud at the championships.

“It is a great honour and a privilege for them to be selected to represent South Africa in these two prestigious world events as they are the only students in the Eastern Cape to be selected to be in the national team,” said South African National Civic Organisation regional deputy secretary Zolani Ngesman.

“It will not only showcase their skills and talents but will also broaden their minds and expose them to a new set of skills at a world stage.

“They will also be exposed to different cultures and the two juniors will get an opportunity to train at the Kyokushinkan headquarters in Japan.”

It will be the first time most of the karatekas have competed at a world championship event, and coming up against the best of the best will be a massive task.

However, they have been training hard and will be as ready as ever by the time the tournament comes around.

“The team has been training very hard under the watchful eye of the undefeated African champ, Shihan Simphiwe Dlulane. Therefore, given the amount of time invested in physical training, sparring and improving their techniques we believe they will bring back home some medals,” said Ngesman.

However, the karatekas’ chances to go may be scuppered as they have not raised enough funds for the trip as yet.

“Financial support from both government and private sector is the biggest challenge, as karate does not enjoy the same support as other major sporting codes, even though it offers better value for money, like discipline and the fight against social ills such as crime, drugs and teenage pregnancies,” said Ngesman.

“Most of our students come from very humble backgrounds, and being selected to be part of a South African team will not only serve as a motivation to their peers but will show the community in general that you can achieve great things no matter your circumstances.

“We kindly therefore appeal to any individual or organisation to assist them in ensuring that these students get this opportunity.

“We have tried all available avenues to raise funds for this trip such as asking donations from the public, submitting financial requests to the Buffalo City Municipality and the EasternCape Sports Confederation, with no success thus far.”

To find out more about the athletes or to assist in any way you can contact Dineo Dlulane on 0810453838 or on email at dineojd@gmail.com.