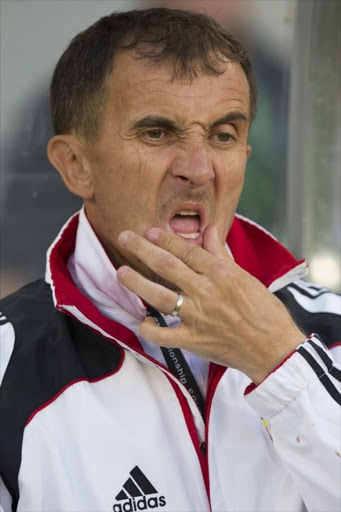 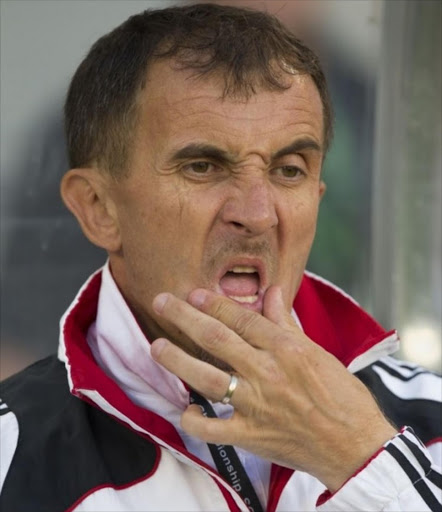 Speaking after his team’s goalless draw against Golden Arrows — leaving their tally on eight goals from 11 league matches — Sredojevich said the problem was psychological.

“From what I can see‚ there is no problem with our football‚ but it’s a mental block to put that ball in the net‚” he said.

“I have been in 138 countries in the world‚ and I have never seen this in my life‚” the Serbian said after another frustrating evening.

Thabo Qalinge missed a good first half chance after dribbling through the opposing defence and Thabo Matlaba and Justice Chabalala should have scored after the break.

Sredojevich said Pirates tried four different attacking approaches in the match‚ but been unable to break down a stubborn Arrows defence.

“But I did see in the body language and the facial expressions of my players that they gave their best.

“They really wanted to win and we had the pressure‚ we tried and we created chances.

“Instead of them worrying about the pressure of getting the result‚ I’ve really tried by all methods to get them to concentrate on practical matters and standards.

“I want them to have a habit of scoring‚ a culture of scoring and automation with scoring.

“Once‚ in this country‚ we get players to do things automatically when they are getting across‚ when they attack through the centre or when they are one-on-one with the goalkeeper‚ we will solve this nationwide problem of not scoring.

“I belong to those who never-say-die‚ never give up. Why?

“Because I believe in the players we have‚ the work we are doing and I believe we will get to the point where scoring comes automatically‚” the Bucs boss added as he now looks ahead to an away trip to Bloemfontein Celtic on Sunday.

“The problem here is that when players miss one chance‚ they spend so much time worrying about having missed that it stops them from working on creating more.

“I try and hammer‚ like putting a nail in the head‚ that if you think about what you have just missed‚ then you are going to miss more.

“I say‚ ‘if you have missed one‚ pay us back by creating three more chances. One should go in’.

“This mental block is not only with us … the lacking of scoring is why our national team is not going to the World Cup.

“From what I’ve seen of what Bafana did to Senegal in Polokwane and Dakar in creating chances‚ Senegal could be a punching bag in Russia‚” said Sredojevich‚ whose team are sixth in the standings but just three points behind leaders Baroka FC.