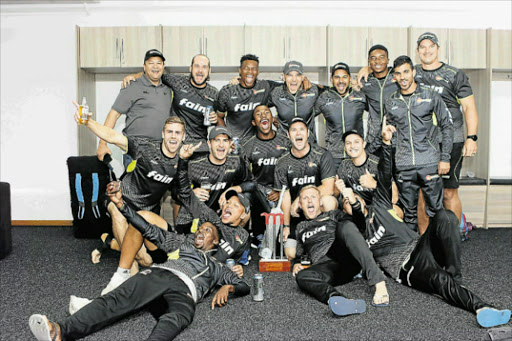 SILVERWARE AFTER EIGHT LONG YEARS: The Warriors celebrate the sharing of the Momentum One-Day Cup final with the Dolphins after rain had spoilt the reserve day ensuring no play was possible for the replay at Kingsmead, Durban on Saturday Picture: GALLO IMAGES
Warriors interim coach Rivash Gobind believes there is much more to come from his squad after they clinched the franchise’s first piece of silverware for eight years on Saturday.

Through no fault of their own, the Warriors were forced to share the Momentum One-Day Cup trophy with the Dolphins when rain had the final say after two days of trying for a result.

The title decider was pushed into a reserve day because of rain, with the Dolphins on 154 for six and the Warriors in firm control on Friday.

Unfortunately, the reserve day and a brand new start to the tie was washed out completely on Saturday.

“I’m extremely proud of the guys. We were close last year. It’s a shared trophy. We’re a bit unlucky not to win it outright because we were well ahead at that stage of the game on Friday,” Gobind said yesterday.

“But we are very happy. We’ll take it and we’ll celebrate it. It’s a reward for all the hard work the people at the Warriors have put in over the last few years.

“Hopefully we can build on this. There is a lot of potential in the system. There are a lot of good, young guys and a lot of guys starting to come into their own,” said Gobind.

The Warriors rode to trophy success on the back of a late surge in the competition. They won only one of their first four games but managed to scrape together another three victories under pressure to claim a berth in the semifinals against their recent nemesis and defending champions, the Titans. But they cracked the nut that was the Titans to claim their third final slot in the four most recent white-ball competitions.

Captain Jon-Jon Smuts is the first captain since Davy Jacobs in 2010 to lift a trophy for the Warriors.

“It’s nice to be back in the winners circle after coming runner-up in the last few years. It was very enjoyable and it was also frustrating,” said Smuts.

“I thought we were in the pound seats going into our batting on Friday but we can’t control the weather and we also could not control how the Dolphins would bowl either. That will remain an unknown, and then the weather intervened again and we couldn’t do much about it.”

“The character we showed at the back end of the competition was unbelievable from the team. We played in some must-win games and it was almost a quarterfinal situation as well as a semifinal. It was great that we could come through on top in both of them. Obviously, to beat the Titans, who have been the form side in the last few years, is something we treasure greatly.”

The Warriors have today off before heading back to the nets tomorrow ahead the resumption of the four-day Sunfoil Series later this week.

Their opponents for the sixth match in the series starting in East London on Thursday are the Highveld Lions. The Eastern Cape franchise are only one win off the top of the table in the competition and will be quietly hoping they can pull off the trophy double come the end of the season.