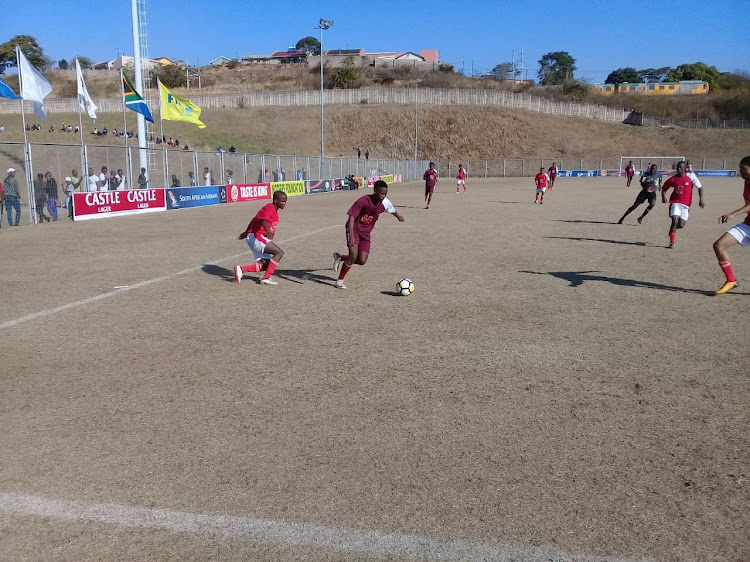 The Eastern Cape province was taken out of the SAB League U21 National Championships after losing 1-0 to Limpopo in their forth game at the King Zwelithini Stadium in Umlazi outside Durban.
Image: Mfundo Piliso

Eastern Cape midfielder Lwando Lids Gxaba who got the man of the match award after the provincial team narrowly beat Western Cape 3-2 at the SAB League U21 National Championships at King Zwelithini Stadium on Wednesday says their goal is to reach the finals.

Gxaba, 19, who plays for the new ABC Motsepe League side from Komani, Amavarara was not too chuffed with the accolade which came with R1000 prize money, as he more excited that were able to get six points in one day.

“I'm very happy because of what we did with the boys – we had to fight very hard for this six points and I'm just relieved we finally did, because we were panicking after that that first loss.

“And even this money I won I'm going to spend it with my team mates because we all worked for it,” said Gxaba.

He said coming back from from an embarrassing 4-0 nil defeat at the hands of last year's runners up USSA was the boost they all needed in order to stay fighting.

“Our first performance was very bad because we couldn't execute the plans we had at the three day camp.

“Because we couldn't do everything that we were practising at the camp – we just froze, and it's not like we couldn't match up USSA because we were on par with them.

“It's just the stage fright that got the better of us, but what I liked is that during the second game we were able to impress the coach [Samnkelo Papu].”

Gxaba said the pep talk delivered by Papu was so inspirational such that they were able to pick themselves up and forge a way forward in order to stay in the running to be this year's champions, something that last happened in 2010.

“He motivated us in such a that we could feel that going to the finals was still possible. Because he was not happy that we weren't coming out to the party.

“Then we started fighting for him because his put so much faith in us because he could have came here with a different team, but he vouched for everyone of us because he believes in us.

“So we had to return the favour as well and most importantly we are here to do our provincial duties – so we are going to fight tooth nail until we can't any more.”

Gxaba said winning their last game was a wake up call to team EC because after beating Northern Cape 2-0 on Tuesday they became complacent - “which is very dangerous when you want to win a tournament.”

“We were relaxed during the start of that game and the opposition [Western Cape] didn't waste and scored two goals in the first half and we left behind.

“But during the half time break the coach spoke to us again we realised that we had all the right tools to win that game. Hence we were able to fight back and score three goals in the second half.

“And now we just want to stay until the final and we also would like to see some of our team mates getting offered jobs at professional clubs.”

The Eastern Cape bounced back in the SAB league U21 National Championship with a 2-0 win against North West at King Zwelithini Stadium in Umlazi this ...
Sport
3 years ago