Springbok coach Rassie Erasmus gives his players the thumbs up 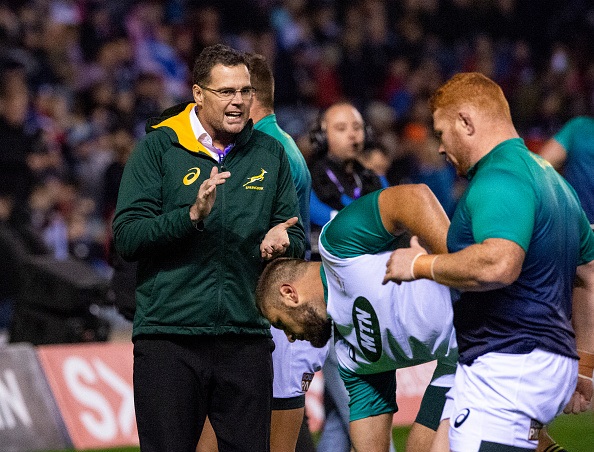 Following consecutive wins over France and Scotland‚ Springbok coach Rassie Erasmus gave his team the thumbs up by making just one change to the squad to play Wales at the Principality Stadium on Saturday.

For the first time this season Erasmus retained the same starting team but has reintroduced fit-again lock Eben Etzebeth to the bench at the expense of Lood de Jager for the last Test of the year.

Etzebeth who left the field injured in the 42nd minute in the opening Test of the tour against England‚ will be eased back allowing Franco Mostert and RG Snyman to start their second straight Test in the second row.

The last two Tests have given Erasmus cause for confidence and it is reflected in his team selection.

The coach is starting to cultivate a bit of a familiar look to his backline with numbers 10 to 14 set to start all four Tests on the tour.

Apart from Etzebeth‚ the club tied scrumhalf Faf de Klerk is perhaps the only other player who can markedly improve the starting team.

Loose head Tendai Mtawarira who is sitting out this tour due to injury is another contender but in his absence Steven Kitshoff has continued to deliver on his rich promise.

Interestingly loose forward Warren Whiteley‚ who started in the Springboks’ win over France‚ is again absent from the match day squad.

What his omission from the last two Tests will mean for his prospects next season remains to be seen.

There may also be voices of disapproval for Bongi Mbonambi’s continued involvement from the bench.

Mbonambi has been one of the Boks’ most reliable players on tour but dislodging Malcolm Marx‚ especially after he was nominated as one of the world players of the year.

The Springboks have delivered solid performances on tour but they will still be ruing the manner in which they allowed England to snatch the opening Test of the tour.

Wales meanwhile‚ has made just one change to their side that beat Australia two Saturdays ago.

Liam Williams moves from right wing to fullback in the place of reliable Leigh Halfpenny who suffered concussion against Australia.

Last week their coach Warren Gatland made 14 changes to the side for their clash against Tonga but he was reverted to his best available squad.

“We have rewarded the team that faced Australia with another start this weekend‚” said Gatland in reference to his side’s 9-6 win.

“We are really pleased with how the bench has gone in the first three games so we will be looking for that impact again on Saturday.”

The last time the teams clashed Wales beat South Africa 24-22 in their final match of the year last December. This year they have won nine of their 11 Tests‚ and are on an eight-match unbeaten streak.

They have won their last three matches against the Springboks including the most recent clash in Washington in June.

They’ve won four of the last five clashes against the Springboks.

Wales seemed to have turned the corner against the Springboks after winning just once in their first 29 clashes against the Boks.

“Wales have a formidable squad and their current run of eight unbeaten Tests is proof and also an indication of their good form at the moment‚” said Erasmus.

“As I’ve said before‚ we know Saturday’s Test is going to be our most difficult match of the tour.”

“We will be desperate to win‚ and to end the tour on a high would be fantastic for the experience and growth of this squad.”

On Saturday Gatland’s side will wear rainbow laces in support of former stalwart Gareth Thomas who was the victim of a homophobic attack in Cardiff last week.

France took the lead on the issue earlier this week when they indicated they would wear rainbow laces in their match against Fiji.