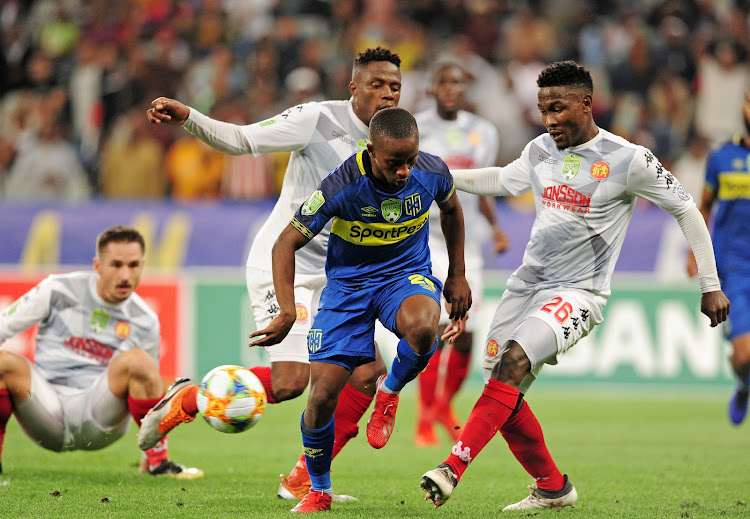 Three goals in the space of 12 minutes handed Cape Town City a berth in the quarter-finals of the Nedbank Cup as they hammered Highlands Park 3-0 in their second round tie at Cape Town Stadium on Friday night.

Captain Thamsanqa Mkhize broke the deadlock on the hour mark and thereafter followed goals from Craig Martin and a horror own goal saw City continue their search for a second trophy of the season.

Mkhize turned the ball in after Kermit Erasmus had produced a save out of Highlands goalkeeper Marlon Heugh to put the home side in front and they quickly took advantage to wrap up the result against a difficult Highlands side who were matching them pound for pound in an entertaining tussle.

Martin’s goal was a brilliantly taken shot on the half volley some 11 minutes later as he took a crack and it dipped into the net for one of the strikes of the season.

Then 60 seconds later a back pass from Luckyboy Mokoena trickled in off the boot of Heugh who failed to clear to rub salt into the visiting team’s wounds.

Highlands will they should have been a goal up as early as the fifth minute when Peter Shalulile looked to score but the refereeing team ruled the full circumference of the ball had not crossed the line in an incident that highlighted the absence of the Video Assistant Referee (VAR) system in the domestic game.

Shalulile’s first effort came back off the crossbar and the rebound hit him on the knee, going back goalwards before City goalkeeper Peter Leeuwenburg scooped it out.

Television replay were not conclusive but it looked harsh that the goal was not awarded.

The woodwork then came to City’s rescue again just after the half hour mark as Sphiwe Mahlangu’s innocuous looking header lopped up against the crossbar and bounced back to safety in another let off for Benni McCarthy’s side.

City had been dominating possession up to that point but were unable to create chances of their own but stepped up the pressure and towards the end of the half saw Thabo Nodada miss out on a good chance to score after a clever pass into the danger zone from Kermit Erasmus.

Nodada hesitated when he should have shot first time with the goal at his mercy.

A minute later Teko Modise, who came on for an injured Roland Putsche after just 15 minutes, also forced a good stop out of Heugh before the break.

City also reached last season’s Nedbank Cup quarter-finals but McCarthy says they want to go all the way this time round: “This competition presents opportunities."