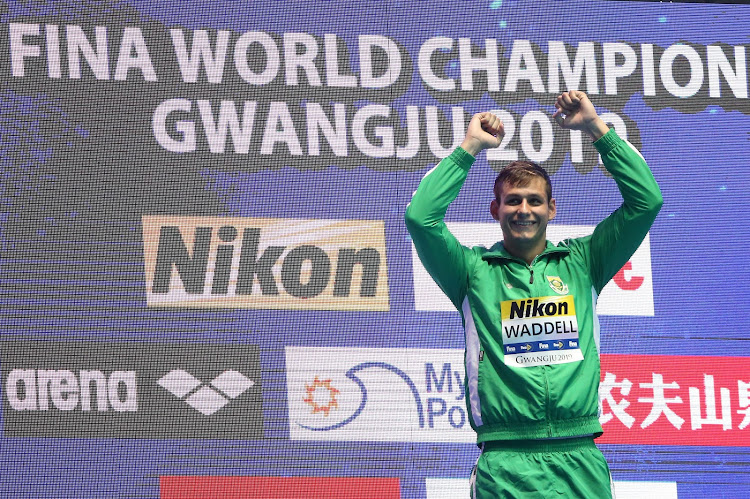 He touched first in a tightly contested men’s 50m backstroke final where just 0.32sec separated the victorious South African from the last-placed competitor.

Waddell took advantage after Russia’s world record-holder Kliment Kolesnikov slipped at the start‚ but the University of Alabama student still had to work hard for his triumph in the one-lap sprint.

His 24.43 winning time‚ a personal best‚ ranks him fourth in the world this year. While five of his rivals in the final had been quicker in their careers‚ only two had been faster this year.

Kolesnikov had been 24.35 in the semifinals.

But when it counted‚ the Russian managed only 24.51 for bronze behind his compatriot‚ Evgeny Rylov‚ in 24.49.

As it turned out‚ the 24.46 and 24.48 Waddell swam at the World Student Games‚ where he shared gold with American Justin Ress‚ would have also been good enough for victory in Gwangju.

Waddell was the only one of SA’s US-based contingent in South Korea to perform above par at these championships.

His was SA’s fourth medal of the gala‚ adding to Tatjana Schoenmaker’s 200m breaststroke silver and Chad Le Clos’ two bronzes for the 100m and 200m butterfly.

As a medal haul this ranks as SA’s fourth-best of the 10 world long-course championships since sprint king Roland Schoeman landed the nation’s first-ever gong in Japan in 2001.

As a gauge for the Tokyo 2020 Olympics‚ only Le Clos and Schoenmaker established themselves as strong medal contenders‚ although Kaylene Corbett‚ eighth in the 200m breaststroke‚ showed she could be a factor too.

Waddell’s gold‚ however‚ comes in an event that isn’t on the Olympic roster; the 53.87 he clocked while finishing fourth at the Universiade in the 100m backstroke‚ an Olympic event‚ ranks him 27th in the world.

He didn’t swim that event in South Korea‚ although his best time would have got him into the semifinals.

SA’s relays were also too far down to be considered potential silverware.

Neither Le Clos nor Schoenmaker could fire the country’s medley relay teams close to Olympic qualification on Sunday morning.

The top 12 teams automatically booked their tickets to Tokyo‚ but both SA outfits were roughly three seconds off that pace.

Schoenmaker was the fourth-fastest breaststroker in 1:07.16‚ but SA’s challenge was pretty much done after the opening backstroke leg‚ where Mariella Venter delivered the second-slowest swim of the morning. Le Clos swam the butterfly leg for the men’s team that ended 23rd out of 27 in 3min 38.13sec‚ 3.03sec off 12th spot.

Le Clos’s 50.95 was the second-quickest butterfly leg of the morning‚ but it couldn’t counteract the slow performances of all three of his teammates.

Christopher Reid’s opening 55.06 was the 10th slowest backstroke leg‚ Michael Houlie in 1:01.16 was the sixth slowest in the breaststroke and Ryan Coetzee was the slowest freestyler in 51.02.

Even so‚ there’s still a chance for SA to qualify relays to Tokyo if they can push their times into the top 16 in the world rankings by May 31 next year.

The best-performing relay in Gwangju was the new mixed-gender medley relay team‚ which ended 15th overall earlier in the week. Le Clos wasn’t in that combination.