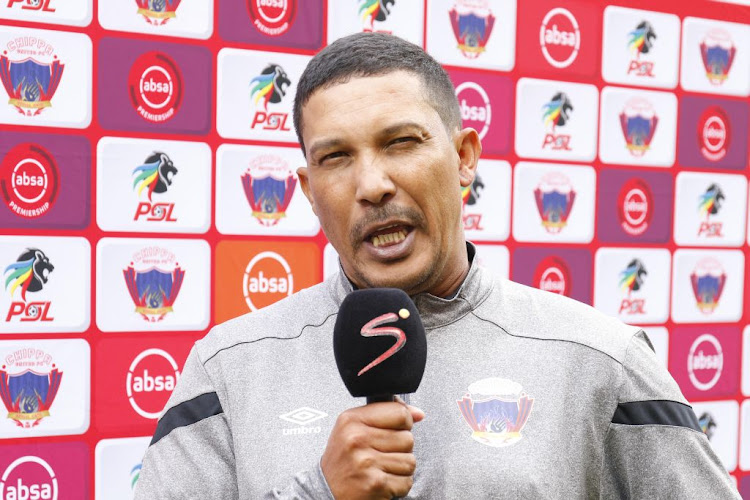 Chippa United caretaker coach Duran Francis says he wants them to play exciting and attractive football and he was happy with their promising performance in the draw with Bloemfontein Celtic last weekend.

Going into their next Absa Premiership clash against Maritzburg United on Friday‚ Francis is hoping that they will bring their winless start to the season‚ that led to the sacking of predecessor Clinton Larsen‚ to an end.

The former Ajax Cape Town and Bay United defender‚ now 42‚ was handed the reigns last week after Larsen was sacked and says players have accepted him as the head of the fold.

“I’ve just been looking to continue with the work of coach Clinton‚ keep off the pressure and just get the confidence back‚” he told TimesLIVE as the club travelled to the KwaZulu-Natal Midlands.

Chippa United have four points from their opening six matches of the season‚ two more than Maritzburg who have played one league game less and both clubs are yet to win.

“Our last performance was very positive and we want to feed off that‚” said Francis of the goalless draw at home with Celtic last weekend.

“We played very aggressively‚ looking to push forward as much as we could‚ which was not easy against Celtic. But we controlled large parts of the game and kept them on the back foot.”

Against Maritzburg‚ the rookie coach said the usually good crowd at Harry Gwala Stadium might put pressure on the home side and that could work in their favour.

“I watched their last game against Sundowns and we’ve got a few plans in place. But we concentrate on ourselves and look to keep it as simple as possible‚” he added.

The Port Elizabeth-based side are still winless in the league after six matches, with their most recent result a goalless draw against Bloemfontein ...
Sport
1 year ago

Chippa United were forced to settle for yet another stalemate as they played to a goalless draw in their Absa Premiership match against Polokwane ...
Sport
1 year ago

Mamelodi Sundowns showed the effects of a weekend trip to the Congo as they conceded in the last minute of the cold of Port Elizabeth on Wednesday ...
Sport
1 year ago

Bradley Grobler stole Samir Nurković's thunder with a late equaliser, but had a late penalty saved by Nigerian goalkeeper Daniel Akpeyi as Kaizer ...
Sport
1 year ago
Next Article