Why Tinkler refused to address Maritzburg's disallowed goal against Sundowns 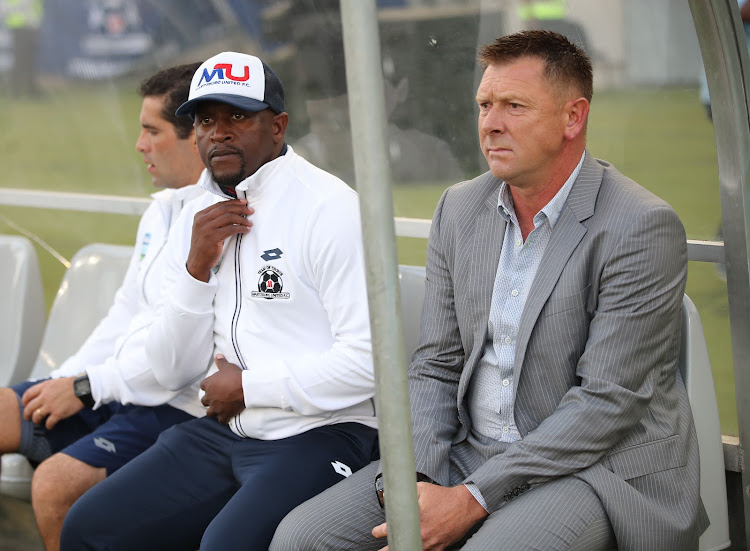 Furious Maritzburg United coach Eric Tinkler refused to address the issue of the last-minute disallowed strike that cost his side a chance at winning the Telkom Knockout on Saturday night.

Tinkler was told by club management to answer “no comment” to questions about Judas Moseamedi’s effort being erroneously ruled offside by the match officials.

But he did harangue the match officials after the final whistle of Saturday’s final against Mamelodi Sundowns at the Moses Mabhida Stadium and was curt in the post-match television interviews as he tried to hold his tongue.

It would have been hard after Maritzburg had the ball in the net for a 2-2 scoreline just seconds before the final whistle‚ but the effort was flagged offside by linesman Sibusiso Sisilani.

Instead‚ Tinkler praised his side’s application and said he “felt sorry for the club”.

“I cannot fault the players‚" he said.

"They worked their socks off to get this far‚ to get to the final of the competition.

“They had to work really hard and they nearly took it.”

His analysis reflected a game of two halves with Maritzburg up at the break but then paying a costly price for defensive slips in the second half to lose 2-1.

“I think we started the game extremely well and I thought we frustrated them.

“We knew they’d have a lot of possession‚ but we kept our shape and we were extremely disciplined.

“We pressed very well‚ and we caught them two or three times on the transition‚” Tinkler added.

“We should have come in at half-time at least 2-0 up and it probably would have been a different story.

“I spoke to the players at half-time that given the quality that Sundowns have we cannot let them off the hook.

“If they felt they worked hard in the first half‚ the second half is going to be even harder because they are going to have to come at us and we need to be extremely disciplined defensively.

“But‚ unfortunately‚ we made two errors ad with the quality they have at Mamelodi Sundowns‚ they’ll punish you and that’s what ended up happening in the second half.

“Our second half performance wasn’t as good as our first‚ which was a bit disappointing‚” he said.