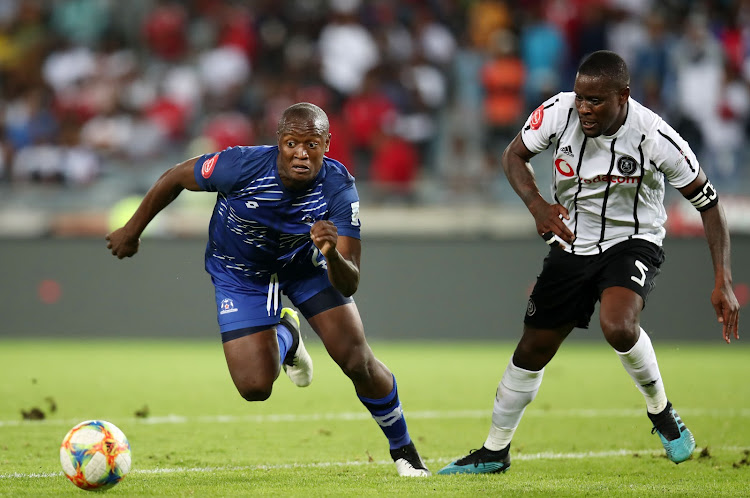 Judas Moseamedi is a Bafana Bafana material, according to his coach Eric Tinkler.
Image: Muzi Ntombela/BackpagePix

Maritzburg United striker Judas Moseamedi has the potential to become a Bafana Bafana regular‚ says his coach Eric Tinkler in the wake of his sparkling performances in the Telkom Knockout.

The 25-year-old striker had been in the wilderness before his two goals for Maritzburg in the semifinal against Kaizer Chiefs‚ and then another in last Saturday’s final against Mamelodi Sundowns in Durban‚ lost 2-1 by United.

He also had last-gasp equaliser ruled offside in a controversial finish to the final at Moses Mabhida Stadium.

Why Tinkler refused to address Maritzburg's disallowed goal against Sundowns

Furious Maritzburg United coach Eric Tinkler refused to address the issue of the last-minute disallowed strike that cost his side a chance at winning ...
Sport
2 years ago

“Judas has shown a hunger and desire to want to succeed and I said to him at the beginning of the season that he has the potential to play for Bafana Bafana.

“He is one of those strikers who will chase lost causes. Any other striker wouldn’t have chased that lost cause but he chases that and that’s how he scored the goal‚” said Tinkler‚ referring to the counterattack first-half goal against Sundowns where Moseamedi managed to hook the ball past both Sundowns defender Mosa Lebusa and goalkeeper Denis Onyango.

“His work ethic and his work rate are absolutely phenomenal.

“Many people only see him as this burly‚ strong‚ aggressive striker but technically he is also very‚ very gifted.

“At the beginning of the season I told him he has to lose weight. That’s one of his biggest problems.

“I know it’s hard and you can easily put on two or three kilos. But he’s shown a hunger and a desire to achieve and that rubbed off on our players in getting to the cup final.

“I’m very proud of him because he was in the wilderness. Just seven months ago‚ he was on the bench at Free State Stars.”

There were many heroes on the pitch for Maritzburg United in their 2-1 Telkom Knockout semifinal victory over Kaizer Chiefs at the Mbombela Stadium‚ ...
Sport
2 years ago

Moseamedi started his career at Mpumalanga Black Aces and made his name under Tinkler in Cape Town City’s first season after they bought the franchise.

But after Tinkler left‚ he did not flourish under Benni McCarthy and was allowed to go out on loan to Stars last season‚ where he scored only one goal‚ and was let go after six months.

He joined Maritzburg in January but made his impact initially only as a ‘super-sub’.

It is only over the last months‚ as Maritzburg have battled in front of goal‚ that Moseamedi was given a chance to play regularly and now he has begun to repay the coach’s faith.

The Tzaneen-born forward played six times for South Africa in the Cosafa Cups of 2016 and 2017‚ netting two goals.