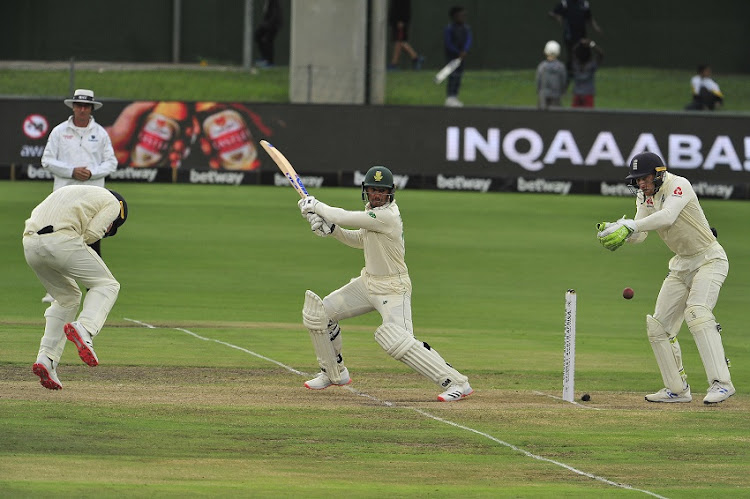 Quinton de Kock of the Proteas cuts with Ollie Pope of England and Jos Buttler of England fielding on day 3 of the 3rd test during the International Test Series 2019/20 between South Africa and England at St Georges Park in Port Elizabeth on 18 January 2020.
Image: © Deryck Foster/BackpagePix

De Kock, who was dropped three times, scored an unbeaten 63 to see South Africa to 208-6 at stumps after rain reduced the day’s play to 64 overs.

Vernon Philander was not out on 27. The home side are still 291 runs behind after off spinner Bess claimed the first five South African wickets to fall.

He bagged two on Friday to leave SA teetering at 60-2 overnight, in replay to England’s mammoth 499 for nine declared, and picked up where he left off on Saturday with three more.

Former Proteas batting superstar AB de Villiers has stated his intention to return to the national team‚ but said there's a lot that needs to happen ...
Sport
1 year ago

Play did not resume until 3.30pm, frustrating England’s march through the batting order. De Kock was dropped twice by Ben Stokes off the bowling of captain Joe Root, first on 30 and then 56, and then again in the penultimate over, by Stokes off Joe Denly.

But he played some characteristically entertaining strokes to provide some respite for the home fans after a relentless pounding from England over the first two days.

Bess had not been selected for the tour at first, flown out to South Africa just before Christmas as cover when a virus struck the England camp.

But he has made a strong bid for a place on their next tour to Sri Lanka with figures of 5-51 in 31 overs.

Proteas assistant coach Enoch Nkwe has called for patience when it comes to transformation of the national cricket team‚ adding that Temba Bavuma ...
Sport
1 year ago

On Saturday he first dismissed Elgar, who edged the ball off his pad to Ollie Pope at silly point for 35, and then he removed captain Faf du Plessis in exactly the same way.

Du Plessis’s future as skipper of the South African side is now seriously in question as he continued his poor form by making only eight runs.

But his fifth wicket came two balls later, to joyous celebration, as Van der Dussen played on and was bowled for 24.

Nortje proved stubborn, soaking up 136 balls before Stokes had him caught by Root for 18.

South Africa still face the risk a follow-on, with England chasing 14 wickets to win the test and go 2-1 ahead in the series before the last test in Johannesburg next week.