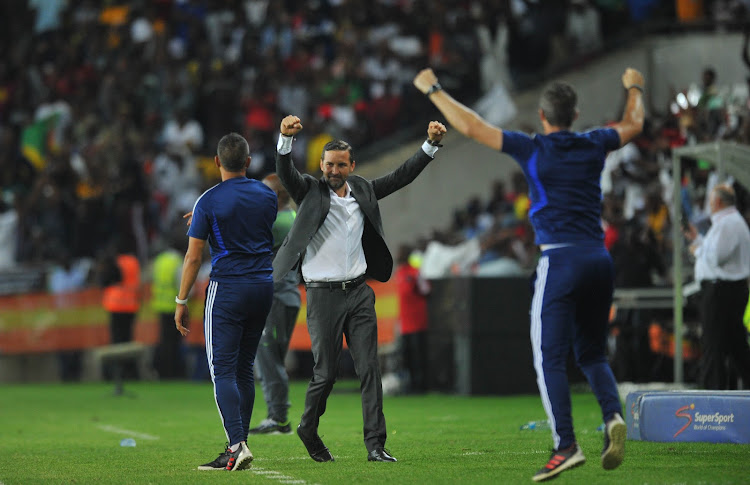 Orlando Pirates coach Josef Zinnbauer is working on a plan to ensure that his charges are able to sustain their momentum for a full 90 minutes and do not disappear in the latter stages of the game after starting their matches on a blistering note in the first half.

Pirates’ lack of momentum in the second half has been their Achilles heel for months and it was visible long before the German coach joined the club last month.

It was one of the reasons they dropped so many points in a number of matches and fell off the title pace.

“We have a lot of work (ahead) of us‚” said Zinnbauer after winning another match with three first half goals against Highlands Park in Orlando‚ who put Pirates under a lot of pressure and scored a consolation 10 minutes from time.

Orlando Pirates are showing a thirst for input in their training sessions‚ new coach Josef Zinnbauer has said‚ explaining how the Buccaneers have ...
Sport
2 years ago

“The transition in attacking and defending is not so top‚ and consolidation is not so good.

"I said this in my first day that the consolidation is not so good.

“But we're fine with what we have now… we get the results. I think we’re all happy now.

“We’ll continue to work and we have a longer week (before hosting AmaZulu FC on Saturday).

“The players need a little break and they’ll come back and I hope we’ll get it right because we need more points.

“It’s not enough what we’ve done in the five games‚ we need more. We have a lot of games and we need all the players.”

Pirates have been firing on all cylinders in the last five Absa Premiership matches and they won four and drew one to remain within touching distance of the pacesetters.

In four of those matches (Highlands 3-1‚ Mamelodi Sundowns 1-0‚ Polokwane City 4-1‚ Bloemfontein Celtic 1-1)‚ Pirates scored all their nine goals in the first half‚ only failing to keep the same momentum in the second stanza.

Zinnbauer on Makaringe's trick: 'I’m not happy about this when we have an opponent like Sundowns'

If Josef Zinnbauer wants to win the hearts of Orlando Pirates supporters‚ and even non-Buccaneers‚ his response to a question on Fortune Makaringe’s ...
Sport
2 years ago

It was only in Zinnbauer’s debut match against Black Leopards (3-1) in which Pirates scored two goals in the second half as they controlled both halves in equal measure.

While Zinnbauer has been blessed with good results since his arrival‚ his predecessor Rulani Mokwena was not so lucky.

Mokwena saw his team giving away leads‚ particularly in the 2-2 draw against Baroka where Bucs had a 2-0 lead in what was Mokwena’s last match in charge.

Bucs were gutted when Gerald Phiri scored an equalizer for Baroka in the dying seconds and it resulted in Mokwena being shifted from the hot seat.

The 3-3 draw against Cape Town City at home in September was also one big highlight of Bucs' failure to defend a lead as they allowed City to grab an equalizer via Shane Roberts in the 85th minute.