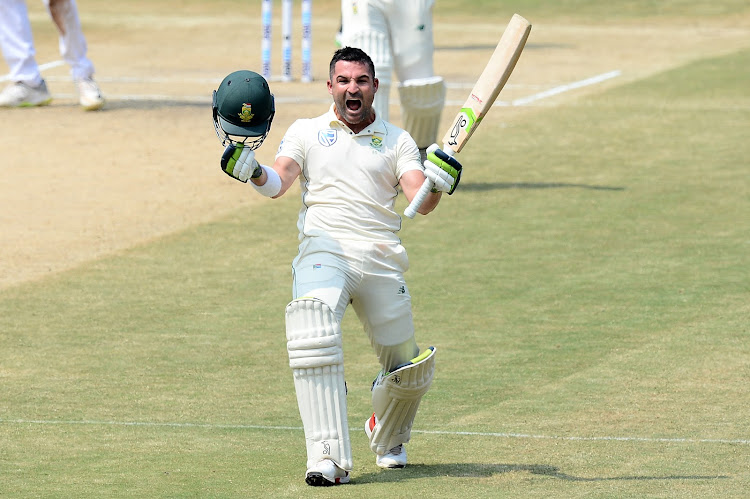 Dean Elgar celebrates after scoring his 12th century during a Test match against India. Elgar made his Test debut in 2012 and is tipped to succeed Faf du Plessis as captain.
Image: Isuru Sameera Peris/Gallo Images

Dean Elgar says captaincy comes naturally to him and‚ if it was offered to him‚ he would also jump at the opportunity to take over the Test vacancy created by Faf du Plessis’s resignation at the beginning of the year.

The stalwart of 66 Test matches for the Proteas became the third player in recent weeks to publicly raise his hand for the coveted job after first choice spinner Keshav Maharaj and right-hander Aiden Markram did the same.

“I have done the captaincy thing in the past and I have done it from school level and provincial level‚ and now in a few professional franchise teams‚ and I have extremely enjoyed it‚” said Elgar from his home in Pretoria in an interview released by Cricket South Africa on Monday.

“If I was asked to do the captaincy‚ definitely I will think hard and long about it because it would mean a lot to me‚” said the Welkom-born left-handed Titans opener.

Du Plessis quit the captaincy after a harrowing home series defeat to England at the start of the year.

Director of cricket Graeme Smith has already confirmed that Quinton de Kock will only lead the team in the shorter formats of the game and this means the Test captaincy role is up for grabs.

Elgar‚ the 32-year-old former Knights star‚ said he has learned a lot from the various Test captains he has played under.

Elgar deputed twice as captain in the absence of Du Plessis losing the 2017 Lord's Test to England by 211 runs and overseeing a 107-run victory over Pakistan in early 2019.

“So I think my learning has definitely been quite vast in that regard because of the personnel that I have had before me in the change room‚” said Elgar.

“It has definitely been an eye-opener for me‚ a great learning curve‚ which I am extremely grateful for.

"As a person you never stop growing really. There is still a lot of growth coming and hopefully what I have learned I can pass it on to the younger guys.”

The opening batsman said he has not done a lot of reflection on his performances during the Proteas’ horrendous summer.

Bowlers looking at resuming test cricket after the novel coronavirus lockdown will require two to three months of preparation to avoid injuring ...
Sport
1 year ago

“But I think if I look back on what was quite a tough and challenging summer in playing India away and England at home. I think I had a relatively decent summer with the bat.

“I think you have got to go through these challenges. It is never going to be easy to play Test cricket against good‚ competitive Test-playing nations‚” said Elgar on how he has dealt with the criticism that has been directed at the team for a poor home summer.

“To keep yourself motivated you obviously look for the bigger picture and you have got to try and look for the positive result all the time.

"I think if you think negatively you have lost the battle already.”