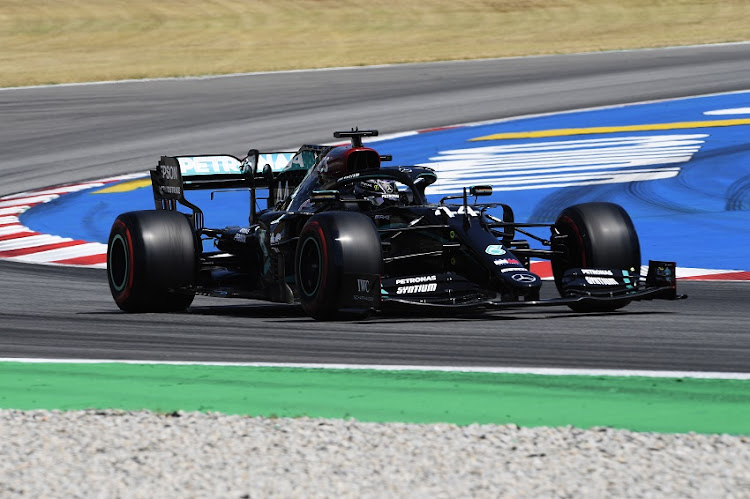 Verstappen is now the six-times world champion's closest rival, the Dutchman 30 points behind after winning last weekend's 70th Anniversary Grand Prix at Silverstone and finishing second in the two races before that.

The 22-year-old will line up third on the grid, one slot higher than he had last Sunday when he came through to win with clever tyre strategy while Mercedes suffered from blistering in the hot conditions.

"Tomorrow is going to be tough when we get to the race," Hamilton told reporters in a video conference at the Circuit de Catalunya outside Barcelona.

"Over a single lap we seem to have the edge over the Red Bulls but this weekend we seem to be pretty much on par on race pace, so it’s going to be a tough battle with Max tomorrow."

Team boss Toto Wolff agreed with that assessment, based on the evidence from Friday practice, even if other elements were different.

"The only similarity between Silverstone and Barcelona this week is the ambient and the track temperatures," the Austrian told reporters.

"But the track itself is very different. So we don't expect the same blistering issues like in Silverstone but nevertheless more degradation and more overheating. And I believe Red Bull masters those conditions very well.

"I hope we can give him a run for his money but definitely Max needs to be seen as the favourite based on yesterday's long runs."

Hamilton has won every Spanish Grand Prix since Verstappen triumphed there on his Red Bull debut in 2016, a success that made him the youngest Formula One race winner.

Hamilton says engine mode change not a problem for Mercedes

Six-times Formula One world champion Lewis Hamilton has shrugged off a plan to restrict cars' engine modes in qualifying, saying it will have little ...
Sport
2 years ago

The Dutchman's win at Silverstone ended Mercedes's Sunday domination of the season so far, even if the team have still taken every pole, and hinted at bigger battles to come between the two drivers in the absence of Ferrari as a competitive force.

"I think we extracted the most out of the car. We can’t complain really," said Verstappen of his qualifying. "I think the car was pretty competitive.

"Of course there are still areas where we can do a better job -- but we are definitely improving the car, which is good.

"I felt very happy in the long run yesterday, with the balance of the car and the wear of the tyres as well."