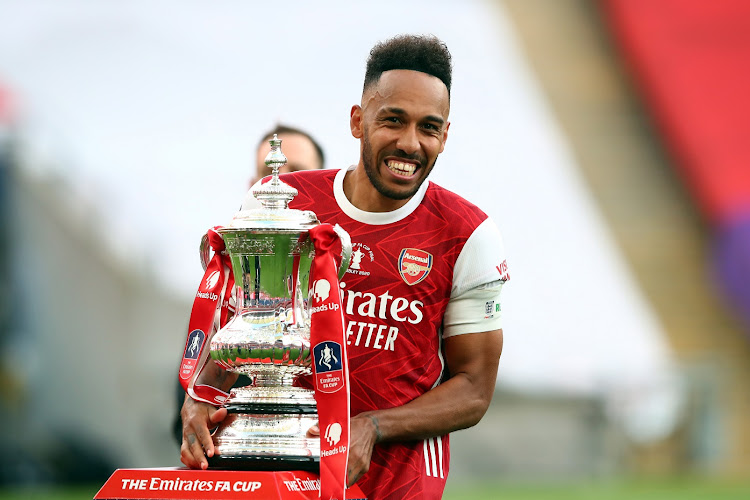 Pierre-Emerick Aubameyang of Arsenal celebrates with the trophy after the FA Cup final against Chelsea at Wembley Stadium on August 1, 2020.
Image: Marc Atkins/Getty Images

London — Arsenal are confident striker Pierre-Emerick Aubameyang will sign a new contract which would tie him to the club for a “long time”, manager Mikel Arteta said on Thursday.

Gabon international Aubameyang, 31, has been Arsenal’s top scorer in each of the past two seasons and has only one year left on his current contract.

“I keep being positive, we have had some really good talks with him and his agent,” Arteta told reporters in a virtual news conference ahead of Saturday’s Community Shield match against Liverpool at Wembley.

“I’m confident we will find an agreement soon. He should be very happy that he will be staying at the club for a long time.”

Aubameyang’s double strikes in the FA Cup semifinal against Manchester City and in the final vs London rivals Chelsea ensured Arsenal qualified for the Europa League.

Having been named captain for the second half of the season, the Wembley triumph delivered the striker’s first trophy with the club since he joined from Borussia Dortmund in January 2018.

Arsenal have signed Brazil winger Willian on a three-year deal, the Premier League club said on Friday.
Sport
1 year ago

Arteta also confirmed that a deal to sign Brazilian centreback Gabriel Magalhaes, 22, from Lille was still in the works as the club look to shore up their defence ahead of the new season.

“We’re trying to finalise the deal,” Arteta said. “Everything is OK only when both parties agree. We’re pretty positive.

“He’s a player we followed and were determined that he was the right profile for us to improve our squad. When we get it [over the line] we’ll be very pleased.”

However, the future of 24-year-old Spanish midfielder Dani Ceballos, who spent last season on loan at Arsenal, is still up in the air and Arteta said the ball was in Real Madrid’s court.

“He was pretty clear with me that his intention was to remain with us but obviously Real Madrid is involved,” Arteta said. “I don’t know yet what they want to do with the player.

“But he’s a player that we are interested in because we really saw, in the last few months of the season, what he is capable of bringing to us.”