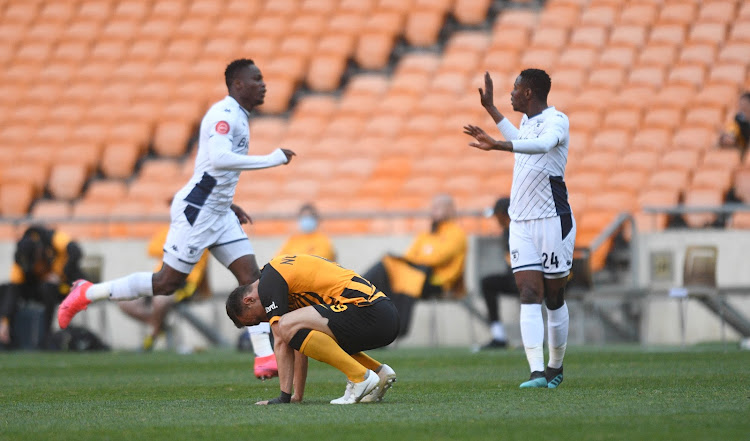 Bievenu Eva Nga's first league of the season was like a spear into the hearts of the Kaizer Chiefs players and supporters.
Image: Sydney Mahlangu/BackpagePix

Bidvest Wits delivered a killer blow to Kaizer Chiefs' league title aspirations when they beat the long-time leaders 1-0 in a dramatic match at FNB Stadium on Sunday afternoon.

Substitute Bienvenu Eva Nga came off the bench to score the goal that broke the Chiefs followers' hearts deep into added time in the 93rd minute.

Chiefs had been piling men forward in a desperate bid to find a goal but Eva Nga had other ideas and punished goalkeeper Bruce Bvuma, who came on off the bench just before the half time break for injured Daniel Akpeyi, with a well-taken strike that knocked the wind out of coach Ernst Middendorp's men.

Mamelodi Sundowns and Kaizer Chiefs may be level on points at the top of the Absa Premiership after Downs’ huge 1-0 victory on Thursday night‚ but ...
Sport
1 year ago

Chiefs were made to pay a heavy price for the numerous opportunities they spurned during the match and their bid to end a long wait for the Absa Premiership league title is now under serious threat‚ with champions Mamelodi Sundowns breathing heavily down their necks.

Sundowns face Baroka FC on Sunday evening and could take over the top spot with a win or a draw.

The impotency that has plagued Chiefs in recent weeks came back to haunt them as the defeat could prove to be very costly on the last day of the season.

Chiefs were boosted by the return of striker Samir Nurković from suspension but the marksman could not find the back of the net.

In fact‚ the striker could have won the match for Amakhosi in the final minutes of the match but was let down by poor finishing when it seemed scoring was the easier option.