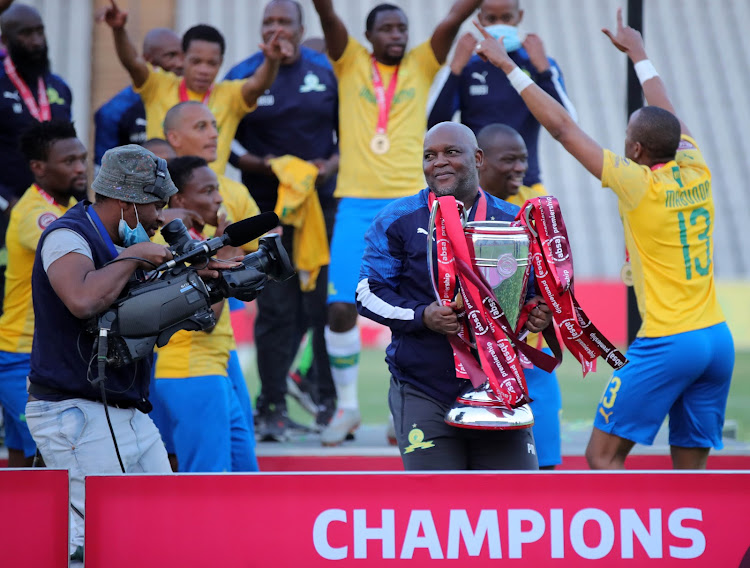 Mamelodi Sundowns celebrated a tenth league title on Saturday but coach Pitso Mosimane had other things on his mind as he launched a scathing attack on his detractors‚ some closer to home at Chloorkop.

Mosimane claimed his fifth Premiership title since assuming the job in December 2012 and became the most successful coach in the Premier Soccer League (PSL) era‚ surging past Ted Dumitru‚ Gordon Igesund and Gavin Hunt who have won the league four times.

As Sundowns celebrated the unprecedented La Decima and their third successive championship title after beating Black Leopards 3-0 at Dobsonville Stadium to win the title‚ the outspoken mentor took time to get a few things off his chest.

The Brazilians won the league after getting the job done against Leopards‚ and with their rivals Kaizer Chiefs only managing a 1-1 draw with Baroka FC on the same day.

"Am I the first coach to buy players‚ all these coaches who were here at Sundowns bought players and they bought more than me. I bought only Mouricio Affonso and Sammy Seabi and they are out injured.

“It has been sweet‚ it has been nice and it’s a good one‚ this is just to teach because I have Lebohang Maboe who only scored three goals for me this year.

"I battled with Keletso Makgalwa and Ali Meza but I make a plan and do what I have to do.

"People say Sundowns can buy any player they can get but I only bought Mouricio who helped us to win the Telkom Knockout.

"You could see that we needed him in the bubble and Sammy (Seabi)‚ but the rest of the players have been around.

“Look at who other teams have bought‚ they have imported everything.

"We have Denis Onyango and everybody injured on the bubble because of the heavy schedule.

"We have been to Cairo and Morocco while other people were playing Saturday to Saturday.

"We stole it and the first time we won it‚ it was here in Dobsonville. We were eleven points behind Kaizer Chiefs‚ now we were 13 points behind.”