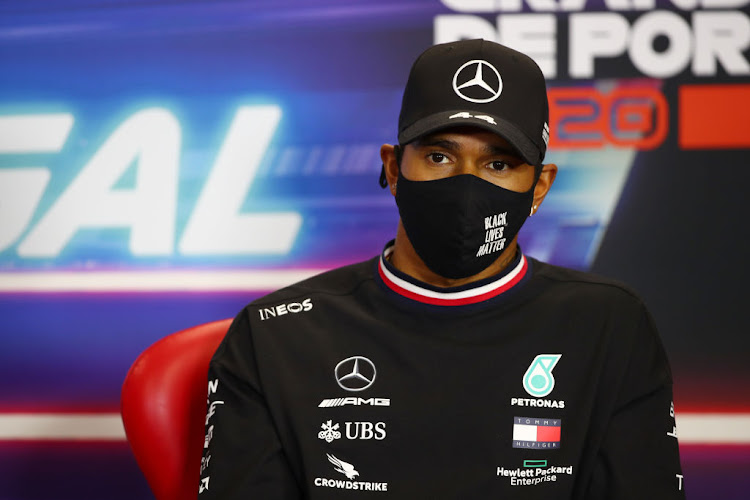 Lewis Hamilton of Great Britain and Mercedes GP in the drivers press conference before the F1 Grand Prix of Portugal at Autodromo Internacional do Algarve on October 22 2020 in Portimao.
Image: GETTY IMAGES/ JOE PORTLOCK

Formula One champion Lewis Hamilton questioned the appointment of Vitaly Petrov as a Portuguese Grand Prix steward on Thursday after the Russian ex-racer criticised his campaigning antiracism stance.

Petrov, who in 2010 became the first Russian to race in Formula One, told Russian publication Championat last month that Hamilton wearing a T-shirt calling for US police to be arrested for the killing of Black medical worker Breonna Taylor was “too much”.

Let’s say a driver admits to being gay. Will they come out with a rainbow flag and urge everyone to become gay as well? I think the FIA will no longer allow such behaviours

“Let’s say a driver admits to being gay. Will they come out with a rainbow flag and urge everyone to become gay as well? I think the FIA will no longer allow such behaviours,” Petrov added, according to translated quotes published in the media.

Informed that the Russian was a steward at Sunday's race at the Algarve circuit, and with the quotes read out to him, Hamilton expressed surprise.

“I've not seen all the quotes, you've just recited some of them,” said Mercedes' six-times world champion, who could celebrate a record 92nd career win on Sunday.

“So yes, of course, that is I would say a surprise to see that they would be hiring someone that has those beliefs and is so vocal about things that we are trying to fight against.

“You should take it up with them (the FIA) really. There's nothing I can particularly do about it.

“We should definitely be including people here who are with the times, who are understanding of the times that we are living in and sensitive to the matters that are surrounding us. So I don't really understand what their goal is.”

Hamilton and Mercedes can break records in Portugal

Lewis Hamilton and his Mercedes team can make Formula One history on Sunday as Portugal returns for the first time in 24 years on a calendar reshaped ...
Sport
1 year ago

The FIA said it appointed stewards with the relevant F1 experience and expertise and who had expressed an interest in the role.

“The Federation does not discriminate in this process based upon views expressed outside their function as an FIA steward, provided that any such expression does not contravene the FIA's regulations and code of ethics,” it added.

While that prevented Hamilton from wearing campaigning T-shirts on the podium, he has still knelt with a Black Lives Matter T-shirt before the race as part of an official antiracism campaign involving all drivers.

The Briton has also worn a black face mask with BLM on it.