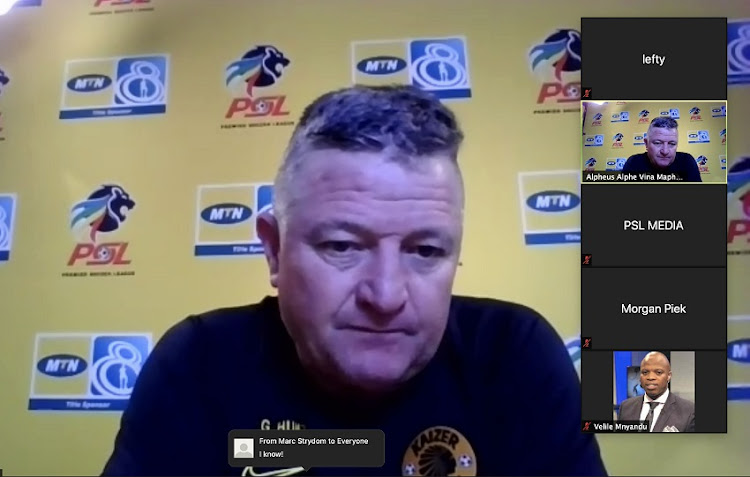 Gavin Hunt knows a trophy in the MTN8 would relieve the pressure immensely as Kaizer Chiefs’ new coach‚ but he is more than experienced enough to also know not to count on it and says he sees the competition as the continuation of his building process.

Hunt’s overriding aim in his first weeks at Chiefs‚ he said‚ after a Covid-19 new normal mini-preseason of two weeks‚ is to find the way of working with the players he has to make Amakhosi a winning combination.

He will continue that process – after Saturday’s poor 3-0 home DStv Premiership defeat to Mamelodi Sundowns‚ then Tuesday’s far more promising 1-0 win against Chippa United away – when Chiefs meet Orlando Pirates in Saturday’s first leg of their MTN8 semifinal at Orlando Stadium.

“This MTN cup has been around for a long‚ long time‚ obviously with other sponsors involved‚ and it’s a great opportunity to get yourself in a cup final so early in a season‚ which I always think helps with momentum going forward‚” Hunt admitted.

“The good thing is we’ve got two games in the semifinal‚ in a home and away situation.

The Court of Arbitration for Sport (Cas) has dismissed Kaizer Chiefs’ appeal against a two-window transfer ban.
Sport
1 year ago

“But I mean‚ for us‚ for me‚ being new at the club it’s just about trying to find out about the players a bit more every day‚ every game. And trying to find a way of playing that suits the players more. That’s the most important.

“You know‚ I can’t come in here and just bash the door down. We’ve got to try to find a way that suits what we’ve got‚ and try to take it a step forward every time.”

In the back of Hunt’s mind‚ as much as his priority is building‚ he will know that a trophy early in his first stint at a big three club – reversing the five seasons Chiefs have endured without one – can buy him a lot of stock at his new club.

“Obviously the magnitude of the club is huge and they expect to win trophies on a regular basis‚” he said. “But you’ve also got to look at a lot of things - why they have been five seasons [without a trophy].

“And let’s just get through Saturday‚ and let me get through a few games. I already know what we need and don’t need. But that can only come out on the training ground, working with the players‚ and obviously try to improve the squad we’ve got and take it from there.

“So ja‚ obviously anybody in their right mind wouldn’t not want to make it to a final and try to take it one step further. But sometimes it takes a little bit longer.”

Chiefs beat Maritzburg United 2-1 – coming from a goal down – in their season-opening quarterfinal to reach the semis.