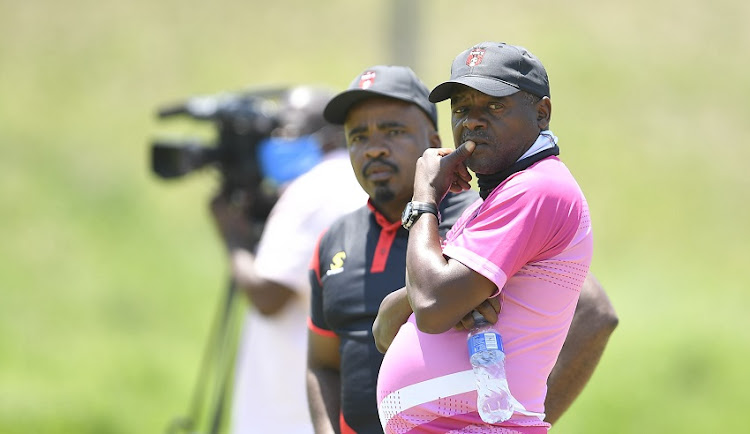 TS Galaxy coach Dan Malesela has told his players to remain grounded as they focus their attention on adversaries Kaizer Chiefs.

Galaxy beat Chiefs in the 2018 Nedbank Cup final when they were still playing in the second tier of SA football and their meeting on Wednesday is the first in the topflight.

“Yes I’ve already said to the players ‘look our next fixture is Kaizer Chiefs and let’s prepare for that’‚” said Malesela.

“We’ll only start on Saturday because we need to rest a bit and there’s travelling (back to their base in Johannesburg) and everything.

“We need to keep going to see that we collect points because the longer you stay without losing the match the more the confidence you build up.

“So I’ve seen a very much improved Kaizer Chiefs from what it was the other day (3-0 defeat on Saturday) against Sundowns.

“So I hope our boys will also live up to what the match will be demanding on the day. Ja‚ let’s see.”

Galaxy and TTM share the spoils in their maiden Premiership showing

Reflecting on his team’s historic first ever victory in the PSL after beating AmaZulu 1-0 at Mbombela Stadium in Nelspruit‚ Malesela said: “One is very appreciative that we got our first three points and in particular at our home venue.

“As for the instructions being followed‚ second half definitely not at all. I’m just a bit concerned that in the last game we played in Venda we had the same thing where we struggled a bit in the second half.

“But we need to work on something and I know what we’ll do to get rid of this and even to better it in the next matches.”

Other than those few concerns‚ Malesela was relieved that they’ll travel to Chiefs next Wednesday with at least four points already in the bag.

TS Galaxy owner Tim Sukazi has given his blessing to former head coach Mabhudi Khenyeza to take up an assistant position at Lamontville Golden Arrows.
Sport
7 months ago

“I’m happy that the players are able to play together‚” was Malesela’s answer when asked to reflect on the task to combine the team Galaxy had in the National First Division last season and the new players‚ mainly from Highlands Park – the team that Galaxy owner Tim Sukazi bought its status of in order to elevate the club to the elite league.

“When I’m saying we make a lot of mistakes and all that‚ it’s not all gloom‚ you know. There are very good positive things that are happening in our games.

“There are positive signs and I think on a different day if we had done the right things in this game (against AmaZulu)‚ we probably would have scored a lot of goals.

“To be honest AmaZulu opened up because they were looking for a goal (equalizer) and if we used our counter attacks (in the second half) properly than probably we would have scored a lot of goals.

“Gelling together is a process and you cannot say in the second match that surely we’re gelling. I think it’s just a process that we need to complete at a certain stage‚ maybe after six or seven games.

“The philosophy is not that clear at the moment. There are bits and pieces where you can see that players are understanding (his instructions)‚ but it should be very clear and it should come out as to what our intentions are in terms of playing.”