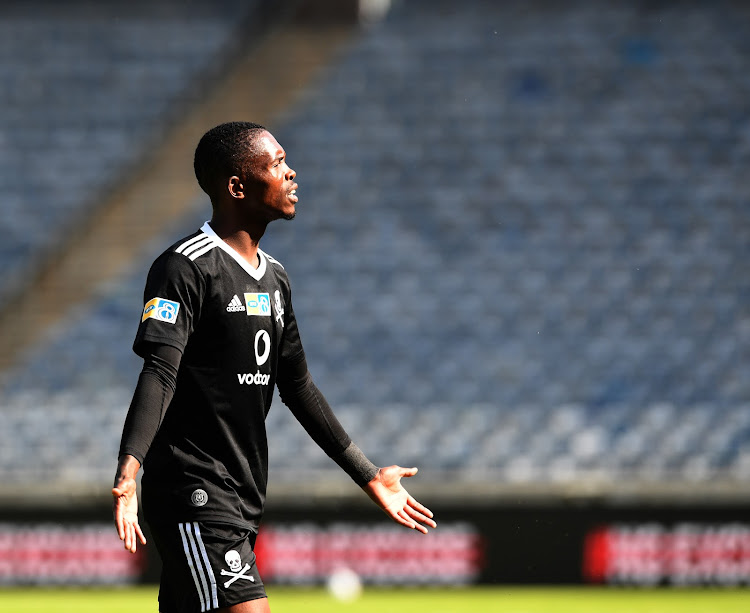 Thabang Monare played a solid 70 minutes and impressed in his debut for Orlando Pirates although the midfielder says his fitness levels are not where he would want them to be having not played competitive football in a while.
Image: Sydney Mahlangu/BackpagePix

Monare became the fourth player signed from the now-defunct Bidvest Wits in the off-season‚ and was the last of those to make his debut as coach Josef Zinnbauer had said the midfielder’s conditioning was not yet 100 percent.

Yet Zinnbauer took a chance starting Monare in place of Fortune Makaringe next to ex-Wits teammate Ben Motshwari on Saturday‚ and the new Pirate impressed playing an influential 70 minutes before being replaced by Siphesihle Ndlovu.

“It feels good to be off the mark for my new club but more importantly‚ it’s great to get the win‚” Monare said of his debut at Bucs.

“I haven’t played competitive football in a while so obviously my match fitness for the competitive games is not where I want it‚ but it’s getting there.

“We are happy with the result on Saturday and I want to give credit to my teammates for making my debut a dream start‚ but we are well aware of the fact that the tie isn’t over yet‚ which is why we are not going to get ahead of ourselves.

“With the season so jam-packed‚ there’s little time to dwell on Saturday’s result.

"The games are coming thick and fast‚ and we have already shifted our minds to the next match against Celtic on Wednesday.”

Pirates will meet Celtic in the DStv Premiership at Dr Petrus Molemela Stadium on Wednesday night with assistant-coach Fadlu Davids likely to take charge on the bench‚ as Zinnbauer flew home to Germany on Saturday evening‚ straight after the win against Chiefs.

Zinnbauer’s son is in a coma in a hospital‚ with the German press having revealed on Tuesday that Fabio Zinnbauer (24) was involved in a horror car accident in Nuremburg on October 23.

Pirates meet Chiefs in the semifinal second leg at FNB Stadium on Sunday.