Banyana get off to solid start 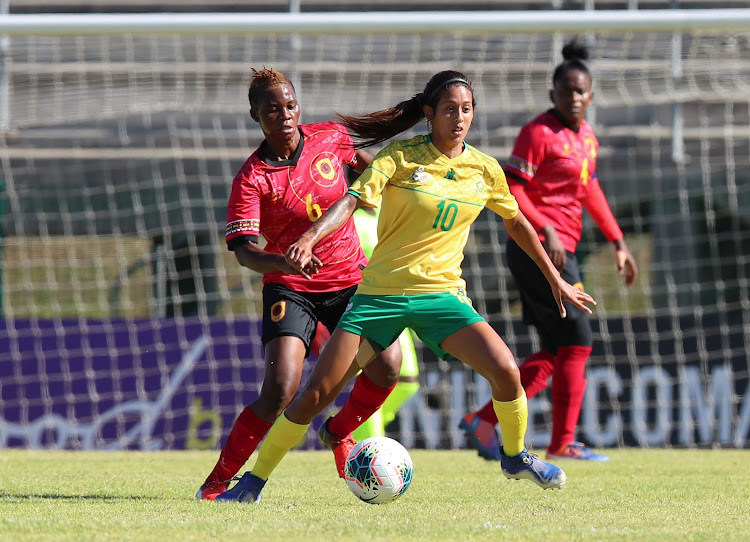 FORGING AHEAD: Robyn Moodaly of South Africa is challenged by Sara Bilumbu Luvunga of Angola during the 2020 Cosafa Women’s Championship match at the Wolfson Stadium on Tuesday
Image: MUZI NTOMBELA/ BACKPAGEPIX

Banyana Banyana  got the defence of their Cosafa Women’s Championship title off to a solid start when they beat Angola 2-0 at the Isaac Wolfson Stadium in Port Elizabeth on Tuesday.

Goals from  Lonathemba Mhlongo and Karabo Dhlamini ensured SA a flying start to the competition which started in the Bay on Tuesday.

The win will be huge confidence boost for coach Desiree Ellis’s young squad as they head deeper into the tournament.

Banyana, who are the competition defending champs after winning tournament a record six times and three times in-a-row, will be hoping to continue their dominance.

Ellis, 57, went into the tournament with only six players from her 2019 winning squad.

She will be pleased with her  team’s performance against Angola despite being a little rusty in front of goal.

Banyana were the dominate side in the first half but stumbled in front of goals on a number of occasions.

It took 11 goal attempts before the SA national women’s side found the back of the net.

The goal came 40 minutes into the match through Mhlongo.

The 19-year-old Durban Ladies player received a cross from Hildah Magaia which she comfortably slotted behind the net, scoring her debut goal for the national senior team.

Banyana continued  with the dominance in the second half but again struggled to find the back of the net.

Bad decision making by the Angolans defence on the hour resulted in Banyana sneaking  a second goal.

Dhlamini, who replaced Mhlongo in the second stanza,  took advantage of the poor communication to also score her first goal for the national women’s senior team.

Banyana next play Eswatini on Friday at Wolfson Stadium (3.30pm).

In the opening game of the tournament earlier on Tuesday, Eswatini came back from being 2-0 down to Comoros through 65 minutes to win the match 4-2.

It was an incredible comeback that saw them bang in four goals in the last 25 minutes to complete a memorable victory.

Meanwhile, the Cosafa Women’s U17 Championship starts in Port Elizabeth  today and will be played as a single-pool round-robin competition featuring the five competing teams, though the sides that finish in the top two in the pool will contest a final.

It ensures the teams will have a minimum of four games during the November 4-14 event, providing much-needed international exposure for the players.

Comoros and East Africa guest nation Tanzania kick off the tournament on  Wednesday at The Oval at 12.30pm, while later in the day SA host Zambia in a massive clash on day one at 3.30pm.

Zimbabwe then enter the competition on Friday against the South Africans, who then play Tanzania two days later, and finish their pool play against Comoros on November 12.

The final of the competition will be at 11am on November 14 at the Wolfson Stadium.