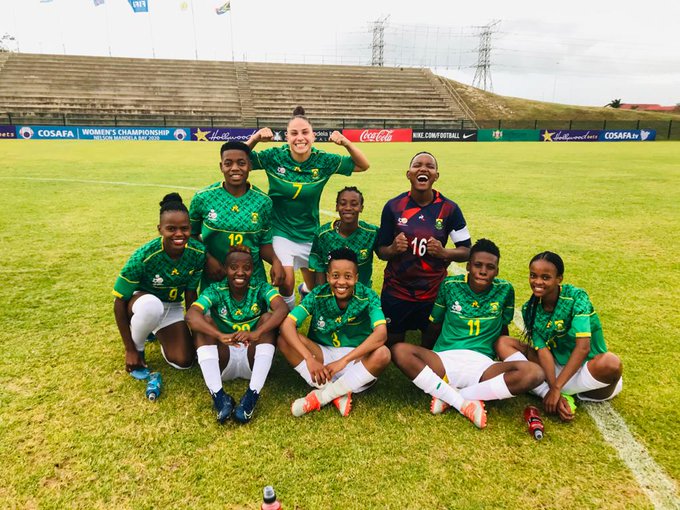 Banyana Banyana coach Desiree Ellis is conjuring up a winning strategy ahead of their Cosafa Women’s Championships semi-final against a strong Malawi side at the Isaac Wolfson Stadium in Kwazakhele on Thursday (3.30pm).

Ellis has to come up with a plan to tame Malawi’s dangerous striking combination in the Chawinga sisters‚ Tabitha and Temwa‚ if they want to keep their hopes of a fourth consecutive Cosafa Women’s Championship title alive.

Reflecting on their 7-0 win against Comoros‚ Ellis said: “I thought we were very scrappy in the first half. We did not move the ball around like we said we were going to but in the second half we were much better.

Sibulele Holweni produced a five-star performance as Banyana Banyana cruised through their final Cosafa Women's Championship Group A game with an ...
Sport
7 months ago

“A lot of the chances we created in the second half with good combination play‚ passing and running of the ball but we got the three points and we are in the knockout stages.

“We will go back and analyse Malawi‚ come up with a plan obviously and then execute [it].

“It is going to be a tough match. They have really played well so far and we have to be on top of our game‚” she said. Sibulele Holweni was the star of the show on Monday after a five-star performance against the islanders.

The 19-year-old Kwazakhele-born player banged home five of the seven goals in Banyana’s 7-0 success against Comoros and earned herself a player of the match accolade.

“We know the quality she (Howleni) has. She is a very versatile player. She has played five‚ fullback and as an attacking midfielder but today she was in the forefront and she took her goals really well.

“That is the versatility that she brings to the team‚” Ellis said.

Ellis has to come up with a plan to tame Malawi’s dangerous striking combination in the Chawinga sisters, Tabitha and Temwa, if they want to keep ...
Sport
7 months ago

In 2019‚ Banyana‚ on their way to a third tournament victory in a row‚ scored a record-breaking 17 goals against Comoros.

The visitors were well-beaten in last year’s competition‚ conceding a huge 35 goals in their three matches. SA scored 10 less this time around as the islanders showed a bit more character.

Former Banyana player Ellis applauded Comoros for their bravery in this year’s competition. “As said from the beginning that when I looked at Comoros they were well structured and they were a bit fitter and they had a plan of how they wanted to play.

“They were better organised as well and you could see it in the games leading up to ours. They were unlucky in their first game when they were 2-0 up to lose 4-2 to Eswatini."

“We knew it was going to be a game where they were going to play their hearts out and we needed to respect them for what they have shown in this tournament‚” Ellis said.

The other semifinal will be contested between Botswana and Zambia (12pm). Both matches will be played at the Wolfson Stadium.