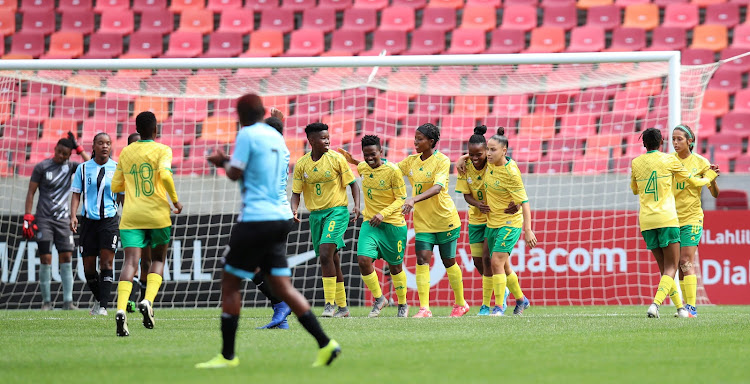 Goals from Sibulele Holweni and Gabriela Salgado saw Banyana claim their seventh Cosafa Women’s’ Championship title and the fourth in-a-row which is a record.

Ahead of the match coach Desiree Ellis said her players needed to stay switched on for the duration of the game if they wanted to beat their neighbours and they did exactly that on Saturday.

Banyana made their intentions clear from the outset soon after referee Antsino Anyukwa had started the game.

With just two minutes gone South Africa's Sibulele Howleni scored the first goal of the match to put her side into an early lead.

Hildah Magaia took her chance at goal in the 37th minute of the match but her attempt hit the side net.

Banyana Banyana coach Desiree Ellis has praised her “new group of players” for executing the plan perfectly during the 6-2 Cosafa Cup semifinal ...
Sport
8 months ago

In the second half, Botswana put pressure on Banyana chasing for an equaliser.

But in the 65 minute Gabriela Salgado extended Banyana’s lead to 2-0  with a fine past after Botswana goalkeeper Maitumelo Bosija could only push Magaia's volley away.

Botswana's Mokgabo Thanda scored scored a consolation goal for her side in the 86th minute.

Coach Ellis’s troops made their way to the final after beating 10 women Malawi 6-2 in the semifinals of the tournament at the Isaac Wolfson Stadium on Thursday.

Banyana beat Angola 2-0 in their opening fixture which was followed by a 5-0 success against Eswatini.

The national women’s team closed their group stages fixtures with a 7-0 triumph over Comoros and finished on top of Group A.

Botswana made history when they booked their first ever spot in a Cosafa Women’s Championship final by beating Zambia 2-1 in the other semifinal on Thursday.